Fine Gael has voted to endorse the programme for government with Fianna Fáil nd the Green Party by a margin of 80 per cent. 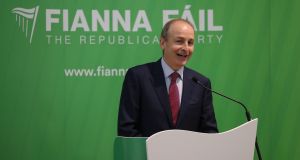 Fine Gael, Fianna Fáil and the Green Party have voted overwhelmingly to enter into an historic three-party coalition.

The Green Party voted by 76 per cent to 24 per cent in favour of the programme for government while 74 per cent of Fianna Fáil members backed the deal. Fine Gael also endorsed the it strongly, with 80 per cent voting in favour.

Green Party leader Eamon Ryan said there is a “sense of responsibility on us now because we do have a job to do”.

“We have to go in and work with our coalition partners in government in getting our country out of a really severe economic crisis. People at home who are losing their jobs, or maybe at risk of that, they want a Government to get up and stand up for them and get everyone back working and we commit to doing that.”

Deputy leader Catherine Martin said “the country is crying out for a stable government and political certainty”. She said the task would not be easy but the Green Party would “hit the ground running . . . This vote may be the end of one process but it is only the beginning of a much more important one.”

Ms Martin said it had been a difficult process for the party. “There were no wrong sides to this debate and I am proud of how our party engaged in this process.”

Fianna Fáil leader Micheál Martin, who can expect to be appointed taoiseach on Saturday, said the vote was “unique” and “historic”.

“I am not aware in the history of Irish party politics of such a vote of this kind where every single member of the party had a postal ballot vote to cast on whether or not a programme for government negotiated between three parties would get the approval of the membership.

“When I introduced this rule back in 2012 back at an ardfheis, at a time when we were at a relatively low ebb, the idea was to give a greater say to the membership of the party.”

Mr Martin said there was a “very energetic debate” at all levels of the party. “I think we are much the better from that exercise and from that energy.”

The Fianna Fáil leader thanked those who campaigned for a “No” vote saying it was done in a “very respectful, very democratic” manner.

“Democracy in our party is alive and well. The vast majority of the party are very anxious that we get on with the business of helping the country to get through this crisis, to engineer economic recovery in the aftermath of Covid-19 and . . . get people back to work and create a better type of society, a better quality of life.”

“Fine Gael is going to enter a third term of government, and this new coalition, united and strong and up for the challenge,” he said.

Among the Fine Gael parliamentary party, 90 per cent were in favour and 10 per cent against.

There was stronger opposition among the council of local representatives with 57 per cent approving the deal and 43 per cent voting against it.

Among constituency delegates, 71 per cent approved the deal and 29 per cent did not. Support among the executive council of the party was 85 per cent in favour.

On Friday ministries in the proposed government were being allocated. However, Minister for Housing Eoghan Murphy is not expected to be a senior or junior minister in a new coalition government.

Sources said that several departments – such as Health, Agriculture, Social Protection, Communications and Education – are yet to be decided.

There will be three “super juniors”, it is understood – one for each of the parties, including the government chief whip, which is likely to be a Fianna Fáil appointment, if Micheál Martin is elected taoiseach on Saturday.

Fianna Fáil is expected to take the position of government chief whip, with the other two super juniors at cabinet going to Fine Gael and the Greens. It is not yet clear which of the super juniors from Fianna Fáil or Fine Gael will take on responsibility for the roads portfolio.

Super juniors are ministers of State who do not have responsibility for a full government department, but who sit at the cabinet table.

Fine Gael will be allocated the position of deputy whip and the Greens will get assistant whip. The Department of Rural Affairs is slated for abolition, although it is unclear to where its responsibilities will be transferred.

The Greens are set to have four TDs at the cabinet table now that the party has approved the programme for government and when the coalition is formed over the weekend. The party will have three full cabinet ministries, including Mr Ryan’s, and also a “super junior”.

Deputy Green Party leader Catherine Martin and Dublin West TD Roderic O’Gorman are also tipped for Cabinet from the Greens. The party is also expected to have four ministers of State, including the super junior at cabinet.

Within Fine Gael, four current Cabinet members are viewed as certainties – Leo Varadkar, Paschal Donohoe, Simon Coveney and Heather Humphreys. After that, Helen McEntee is tipped for promotion from the junior ranks to a full cabinet post, which leaves one full cabinet job and the super junior role – with several outgoing Ministers seeking each.

In Fianna Fáil, as the party anticipates a return to government for the first time in almost a decade, the situation is more fluid. With Micheál Martin poised to become taoiseach, it is considered certain that Michael McGrath will take the role of Minister for Public Expenditure. Barry Cowen, Jack Chambers and Dara Calleary are also tipped for cabinet or super junior roles, while Darragh O’Brien, Anne Rabbitte, Thomas Byrne or new Kerry TD Norma Foley could also figure.

13:02 FF TDs would not exclude Sinn Féin coalition after next election