The general election will be held on Saturday, February 8th, Taoiseach Leo Varadkar confirmed, speaking outside Government Buildings before travelling to Áras an Uachtaráin to seek a dissolution of the 32nd Dáil from President Michael D Higgins. Video: John Cassidy & Bryan O'Brien 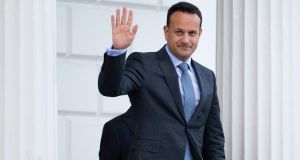 “The Taoiseach could have made his announcement indoors, but the imposing backdrop of Government Buildings was the perfect setting for a man being packaged in this election as a European statesman with proven leadership credentials on the international stage.” Photograph: Tom Honan

The last cabinet meeting of the 32nd Dáil was done. Decision made.

It was a big moment.

As his Ministers watched in silence, Taoiseach Leo Varadkar turned to sign the order requesting the dissolution of his Government. He hesitated suddenly, pen poised above the document. He looked around the table.

“Anyone want me to change my mind?”

And finally, after a soggy morning of giddy anticipation around Leinster House, Leo appeared at the steps of a rain-lashed Government Buildings and called time.

He did it in two languages, reminding voters he always said he would go for an election when the moment is right.

“Anois an t-am sin,” the Taoiseach declared portentously. “Now is that time.”

At least it was, until he decided to start tinkering with the clock, confusing matters mid-speech and announcing, by way of Brexit, “in fact, it’s only half time.”

Dominic Cummings must be seething with envy.

Posters began bothering lampposts in the morning while the Cabinet was still meeting and hours before the election date was formally announced. In fact, even the Taoiseach’s posters got up early in the morning.

That may be because someone in the party was being really clever around Leo’s favourite catchphrase about looking after the people who get up early in the morning such as office cleaners and Cork-based TDs catching flights to Brussels. But, judging by the campaign slogan, that’s highly unlikely.

“A future to look forward to.” It fairly trips off the tongue. Mr Micawber would approve. The team had been keen to sign off on “Something will turn up” until a minion realised Dickens got there first.

Of course, it has to be about the future, going forward. Although, in the space-time continuum, there are endless possibilities.

A future to look forward to.

A present to look away from.

A past to make a bags of.

As Kung Fu Panda once said: “Today is history, tomorrow is a mystery.” But what if their great future turns out to be behind them?

This is where Brexit comes in. It is Fine Gael’s election trump card and was produced with a proud flourish by the Taoiseach in the opening minutes of what will be 3½ weeks of out-Borising Boris on the Brexit front. In an opening salvo delivered to an audience of cold and rain-sodden hacks in the courtyard of Government Buildings, Leo’s message was very simple: We will get Brexit done.

His negotiating team in Europe, led by Simon Coveney and Helen McEntee, is seen to have done an excellent job in this regard on the country’s behalf over the last couple of years. Now, the push is on to allow them continue in their roles for the greater good. It’s a persuasive pitch and, by far, Fine Gael’s best line.

The Taoiseach could have made his announcement indoors, but the imposing backdrop of Government Buildings was the perfect setting for a man being packaged in this election as a European statesman with proven leadership credentials on the international stage.

“We have the team. We have the track record. We have the plans,” he proclaimed at the end of his speech, rapidly turning on his heels and scuttling inside. There would be not questions from the media. It will be interesting to see if that policy continues.

But think of poor Micheál, who has been expecting for years now. This time though, Fianna Fail is nursing very real hopes that their leader can finally make it

Across in Leinster House, the Fianna Fáil leader was casting covetous eyes on his job. Not that Micheál Martin would admit this, as he is only in this battle for the good of the people. “It’s not about me,” he tells anybody who suggests otherwise. Perish the thought.

His party has recycled its slogan from the last general election, which is very on trend.

While Leo’s tagline is a dogs dinner, Micheál’s is “a philosophy”.

“It’s not a slogan,” he insisted, nipping in for a sneaky press conference in the half hour before the Taoiseach fired the starting gun. “It’s a philosophy. It’s a viewpoint.” He also called it “a philosophy, slogan”.

He was joined by his finance spokesman Michael McGrath and front benchers Niamh Smith and Lisa Chambers for this early philosophical dander around “a very, very relevant political viewpoint”. We hadn’t seen Lisa since before the Christmas break and were delighted to discover she will be concerned with more than political developments in the weeks and months to come.

She is expecting her first child around the middle of April. “It’s going to be a busy and eventful start to the year, that’s for sure,” said Lisa afterwards.

But think of poor Micheál, who has been expecting for years now. This time though, Fianna Fail is nursing very real hopes that their leader can finally make it to the Taoiseach’s office. He was certainly in high spirits on Tuesday.

“The ground campaign will be very important,” he stressed. And the importance of the doors cannot be underestimated either, said the Fianna Fáil leader, who intends to carry on his proud election tradition of racing around the country like a man possessed.

It kinda reveals the essence of this Fine Gael party. Everything is a way into the future

“I’ve been on the doors a number of years now.”

If Leo was all about Brexit and broad economic figures in his first outing, Micheál was all about housing and health in his opening performance. “Things are simply not working in this country in so many areas,” he argued. His party will be putting forward “a positive, comprehensive agenda” to change this.

He had a little chuckle at Fine Gael’s slogan about looking forward to the future. “It kinda reveals the essence of this Fine Gael party. Everything is a way into the future.” People can’t wait for FG’s future, he reckoned, while touching only on the nice things about Fianna Fáil’s past.

Apparently they put “the backbone” into the fiscal recovery while “there’ll be a certain sort of shiver going about the country” when people contemplate a Fine Gael future. As his predecessor Bertie Ahern once said: “It’s enough to send cold spines up and down your back”.

As the circus rolled into town, Finian McGrath was preparing to pack up and move out. The popular Minister of State announced he would not be seeking re-election and the leafy groves of Dublin Bay North reverberated with the joyful cries of Labour Senator and former TD Aodhán Ó Ríordáin.

Senator Michael McDowell, delighted to see the Judicial Appointments Bill he fiercely opposed in the Seanad die with this Government, announced he would not be running for the Dáil. This came as a surprise to many as the former tánaiste seemed very keen to return to the Lower House.

Perhaps he took some soundings on his prospects in Dublin Bay South. Finian may have done the same across the bay. And then, as the late Larry Gogan might have said, “Aah, sure the polls didn’t suit you.”

The Taoiseach takes his half-time Brexit roadshow to Monaghan on Wednesday where he will be showing off Simon and Helen while burnishing his rural credentials.