Miriam Lord: Sinn Féin voters may be denied the gift they most desire 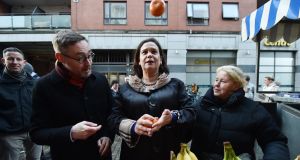 As photographs emerged of Mary Lou McDonald squeezing satsumas and bunches of bananas across the road from the fish stalls, it seemed a world away from her Sinn Féin colleagues celebrating election wins with shouts of “Up the Ra” and “Tiochfaidh ár lá” while singing their way through the Wolfe Tones’ back catalogue.

In Mary Lou’s new dispensation, Come Out, Ye Black and Tans is to be replaced by Biddy Mulligan, the Pride of the Coombe, and “Get the last of the or-in-giz!” will soon be the rallying cry where once they roared “Brits out!”

Now that she has emerged as the de facto leader of 32-county Ireland, the Sinn Féin president celebrated the first full day of her republican reign by embarking on a Greatest Hits of the Election Tour tour, beginning in one of her favourite venues, where the crowd is always on her side: Moore Street in Dublin.

Because Mary Lou is now the hottest story in town, an unmerciful media free-for-all was anticipated among the fruit and veg.

But an hour or so before she was due to make her royal progress through cheering street traders, the weather turned very nasty. Rain, hailstones and even snow lashed down in Dublin city centre.

The country is still drawing breath after her party stormed the ramparts of the Irish political establishment with an unprecedented torrent of support, but for all the flood metaphors, a drowned Mary Lou McDeluge was not the look they were after.

Mary Lou was entitled to be a little sassy as her two main rivals, Leo Varadkar and Micheál Martin, contemplated their dire results

Although a few bars of “hail-o Mary Lou” would have been fun when the sleet turned to ice.

Luckily for the woman in the happy position of overseeing the almost doubling of Sinn Féin’s Dáil representation while causing fainting fits among a sizeable section of the populace terrified at the prospect of the party getting hold of the keys to the Department of Justice or the Department of Defence, the after event was cancelled, with a later one scheduled for the evening.

Then the clouds parted, so it was decided to do the walkabout after all. Unfortunately the only media present were TV camera crews from RTÉ and Virgin and a handful of delighted journalists and photographers from overseas.

“I may well be the next taoiseach, yes,” she brightly informed the small contingent following her, safe in her new position as the nation’s political leader of choice.

With 37 TDs in the bag – almost all romping home on the first count and leaving the rest of the field to fight it out for the minor placings – she was entitled to be a little sassy as her two main rivals, Leo Varadkar and Micheál Martin, contemplated their dire results.

While Mary Lou was promenading along Moore Street, they were still waiting to find out exactly how few seats their respective parties might painfully squeeze from the final counts.

Fine Gael will finish in third place. Fianna Fáil should just about manage to dip under the line into first. But Sinn Féin will be cock of the walk in the middle.

If nothing else, the Dáil will be a far livelier place than it has been for many years.

Sinn Féin will rue running too few candidates, but the decision was made when nobody thought the party was going to smash though the system with such force. As it is, Sinn Féin’s historic breakout in the 2020 general election will be there in the pantheon of great breakouts commemorated in places such as the Felons’ Club on the Falls Road and the gift shop on Parnell Square.

A substantial majority of the electorate wants change. It may not be to their liking, though

Winning wasn’t so easy for everyone. The Lazarus League gained and lost members throughout the day as TDs who thought they had lost suddenly had a reversal of fortunes and won.

Gino Kenny of Solidarity-People Before Profit thought he was dead and gone. He cried for joy (as did everyone around him) when he finally arose and appeared to the many in Dublin Mid-West.

Fine Gael’s Paul Kehoe did a similar Houdini act. But rival Malcolm Byrne, who was first elected to the Dáil for Fianna Fáil in the Wexford byelection in November, did not survive and has become one of the shortest-serving TDs.

On a salutary note for the euphoric Shinners, on Monday Brendan Howlin became the last TD standing from the Labour’s historic “spring tide” of 1992. The party went from 15 to 33 seats, and its role as a new force for change in Irish politics was overwritten with the same sort of “groundbreaking” comments being lavished now on Mary Lou.

But while Sinn Féin’s achievement is much more significant given the party’s past, it is interesting to note that four Labour TDs from that 1992 election were still standing when the country voted last Saturday. Joan Burton, Emmet Stagg and Joe Costello were unsuccessful. Howlin, the party leader, retained his seat.

Younger colleagues such as Alan Kelly, Aodhán Ó Ríordáin and Ged Nash were maintaining a dignified stance in the difficult aftermath of Labour’s poor showing, but talk of a new leader has already begun.

The same rumblings have started about Micheál Martin and Leo Varadkar.

As a matter of interest, a number of names still survive on the roll call of deputies since that other “seismic” election nearly 30 years ago, when Labour was the next big thing until everything went downhill.

Róisín Shortall (once a Labour TD) is riding high as joint leader of the Social Democrats. They had a good election. Declan Bree was another spring tide Labour TD. He left the party many years ago. He stood in Sligo this time out but didn’t get a seat.

One Fine Gael member is left, Bernard Durkan in Kildare. (And we mustn’t forget two more in Europe, Frances Fitzgerald and Phil Hogan.)

So who will form the next government? Who wants to form it?

A substantial majority of the electorate wants change. It may not be to their liking, though.

Varadkar has made it clear he doesn’t want to deal. Martin may be softening his position, but there was little communication from his end on Monday

Think of it this way: some people go to their graves grumbling about the time they asked Santa for a special present only to discover the thing they didn’t want lying under the Christmas tree.

The experience of excitedly ripping away paper only to find a pink Peppa Pig bike instead of a kick-ass BMX leaves its mark. It’s a kick in the teeth, a big disappointment. Some never quite forget the betrayal.

Parents may explain later why it happened, why it just wasn’t possible, for all sorts of pressing reasons, to deliver. But the resentment is there.

So here we are now, all grown up. But we still want special things.

Dear Santa,
We hope you are keeping well, and Rudolph too. Please can we have a government that does not involve Fine Gael and Fianna Fáil. And a big change. And a surprise.

We have been very good since the economic crash. Nana can’t hear since she got her leg done and uncle Paddy is still living in the shed.

Thanking you in anticipation.

These are the voters who shredded the political fabric on Saturday and ripped up old certainties because they desperately wanted fresh fingers to stitch together a new national pattern in the weeks to come. Their big ask: leave the two main parties, the parties that have run the country since forever, out of the overall design.

But two days after this majority expressed a special wish, circumstances may block their hearts’ desire. In unprecedented numbers, they asked Sinn Féin to deliver. A failure to do so will lead to certain disappointment and resentment among the electorate. But it’s a distinct possibility when the time comes to unwrap the next government.

It’s down to a numbers racket now, but Sinn Féin doesn’t control the game, even if Mary Lou McDonald talks a helluva good one.

The dealing is only starting, and it doesn’t look like Sinn Féin – the real big change – and the amalgamated forces of the left can muster enough bodies to form a government.

So having strongly rejected Fine Gael and Fianna Fáil in favour of Sinn Féin and like-minded TDs, the one political present the people didn’t want might yet end up under the tree after all.

Varadkar has made it clear he doesn’t want to deal. Martin may be softening his position, but there was little communication from his end on Monday.

But after all that, imagine having the same, or half of the same, in government again when what you wanted was something new and exciting wrapped up with a Sinn Féin bow?

Maybe that will be the surprise your Santa letter brings.

There could be tears before beditime yet.