Micheál Martin will not reverse stance on ruling out Sinn Féin 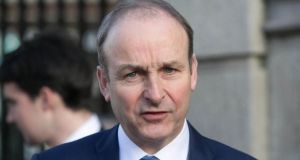 Fianna Fáil leader Micheál Martin. Some of the party’s TDs have said that Fianna Fáil should be open to discussions with Sinn Féin, but others are strongly against such a move. Photograph: Gareth Chaney/Collins

Fianna Fáil leader Micheál Martin is expected to tell his TDs today that he will not reverse his position on entering government with Sinn Féin.

Mr Martin will meet his new parliamentary party at Leinster House on Thursday for the first time since the general election for discussions about possible coalition options and how the party should proceed after a bruising election result.

But Mr Martin is not expected to change his position on Sinn Féin which he repeatedly articulated during the election campaign: that he will not enter government with Mary Lou McDonald’s party for reasons of wide policy differences but also because he does not consider Sinn Féin to be a normal democratic party.

Mr Martin is understood to have been in contact with many of his TDs in recent days, but party grassroots members have also been making their feelings known to the leadership. While there is some support in the party for sharing government with Sinn Féin, there is also fierce opposition to the idea at all levels of the party.

Some TDs have said that Fianna Fáil should be open to discussions with Sinn Féin, but others are strongly against such a move. Many in the party feel that it should remain in opposition.

Several rounds of talks between the parties took place, with Green Party leader Eamon Ryan meeting the leaders of Fine Gael, Fianna Fáil, Sinn Féin and the Social Democrats, though it is understood that these were very much of a preliminary nature.

Meanwhile, the prospect of a minority government being propped up by a confidence and supply agreement similar to the last government, seemed to be receding.

Social Democrats leaders Catherine Murphy and Róisín Shortall, who met their four new TDs at Leinster House yesterday, also expressed doubt over the feasibility of a minority government that had no support arrangement such as confidence and supply in place.

Ms Shortall also said she thought a minority government that was not relying on any support agreement from others was also “unlikely at this stage”.

Taoiseach Leo Varadkar has also privately ruled out supporting any government in a confidence and supply deal, it is understood.

Mr Varadkar said yesterday that it was likely he would be leader of the opposition in the new Dáil but if Fine Gael was needed to provide political stability, his party was “willing to talk to other parties about that”.

Mr Varadkar said “anything is possible” in the coming weeks, “including a second election”. However, a second general election was not an outcome that would be “good for the country”, he said.

Election fallout continued yesterday when Labour leader Brendan Howlin announced he would step down as party leader. Mr Howlin, who has led the party since 2016, said he would ask the party’s executive to arrange a leadership election as soon as possible. He also said he had recommended – and his TDs had accepted – that Labour will not enter coalition in this Dáil.

It is expected that Tipperary TD Alan Kelly will be a candidate for the leadership, though none of the potential contenders – including newly elected TDs Aodhán Ó Ríordáin and Ged Nash – were confirming their interest last night.

Cork TD Seán Sherlock however, has said he will not be putting his name forward for the leadership race.