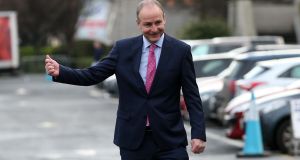 Fianna Fáil leader Micheál Martin has said the Taoiseach had admitted to him that he was not confident of the support of some Fine Gael members, including Maria Bailey, in the upcoming no confidence vote in Minister for Health Simon Harris.

The general election campaign is now effectively under way after Leo Varadkar indicated heavily on Sunday that he will call an election in the coming days because the tight Dáil arithmetic had meant “circumstances had changed” since he previously stated he wanted to go to the polls in May.

Mr Varadkar said he wanted to discuss the election date with the Cabinet, which is meeting on Tuesday, and Opposition leaders before announcing the date.

However, he is expected to seek a dissolution of the 32nd Dáil at the end of the week.

On Monday Mr Martin said the loss of three TDs had hamstrung the Taoiseach.

“He said to us that he wasn’t sure of some of his own people,” Mr Martin told the Today with Sean O’Rorke programme on Radio One. This meant the Government was no longer confident of being able to fend off no confidence votes.

Mr Martin said his party had honoured the Confidence and Supply Agreement between the parties and said “no one can question Fianna Fáil’s bona fides.”

He claimed the current Government was more concerned with its own image and there was no doubt it had failed on health and housing. “In this election we’re saying we need a change in government.”

In the last nine years Fianna Fáil had supported the fiscal treaty and had been responsible and had facilitated responsible budgeting. “We didn’t prevent them (the government) from delivering on health and housing.”

Mr Martin also defended his own and his party’s record in health and said that “by any metric” Fine Gael had failed. James Reilly “did damage” when he got rid of the National Treatment Purchase Fund.

“Simon Harris hasn’t delivered 1,000 beds; the real issue here is three Ministers - James Reilly, Leo Varadkar and Simon Harris - were more interested in sound bites than in getting out of the health crisis.

Mr Martin said Fine Gael had presided over the escalating cost of the children’s hospital from €0.5billion to €2billion.

Mr Martin said he believed Fianna Fáil is stronger now than going into the 2016 general election. “It’s not about Micheál Martin, it’s about issues like health and housing. I don’t have much patience or tolerance for who’s in and who’s out.

“We’re not going to fail in this election. We’re going to win more seats. It’s about a new government which can bring a new focus to health and housing.

Mr Martin said he would be prepared to talk to other parties to form a government, with the exception of Sinn Féin.

Asked about the possibility of forming a government with Sinn Féin, Mr Martin replied: “Let me make it clear. I don’t trust Sinn Féin.”

Mr Martin said he had a problem with people outside the elected representatives contributing to what happens. “You don’t get over that.”

On the same programme Sinn Féin leader Mary Lou McDonald, who has also been ruled out as potential coalition partner by Fine Gael, said she would talk to all parties after the next election.

She claimed the reason Mr Varadkar and Mr Martin do not want to go into government with her party was because “they know full well that we will bring about change.”

The Northern Ireland Assembly resumed on Saturday after power sharing collapsed three years ago after Sinn Féin withdrew over the DUP’s role in a controversial botched green energy scheme.

Ms McDonald said: “If Sinn Féin can govern in partnership with the DUP - people we have profound political differences with - how on earth is it logical to then say that Sinn Féin isn’t good enough to be in government in the south?”