Taoiseach’s election language seen as more ambiguous than before 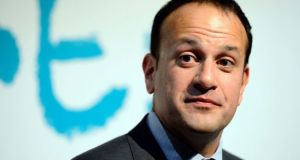 Taoiseach Leo Varadkar: ‘My preference has always been for an election in the summer of 2020. However, that may not be under the control of me.’ Photograph: Cyril Byrne/The Irish Times

Taoiseach Leo Varadkar has said he wants the general election to be held at the “right time for the country”.

He was speaking in response to comments from Fianna Fáil leader Micheál Martin, who again on Friday said that he sees Easter as the natural “cut-off point” for the Dáil and that there should be an orderly wind down of the Government.

When asked on RTÉ Radio’s News at One about the possibility of further “no confidence” motions in Government Ministers, Mr Martin said he had not “played games” and had demonstrated good faith.

In Brussels, the Taoiseach deflected questions on a possible general election date.

Asked about Mr Martin’s comments about a post-Easter election, Mr Varadkar said: “My preference has always been for an election in the summer of 2020. However, that may not be under the control of me or the leader if Fianna Fáil, and we saw how tight the numbers were on the last vote and we see some indications from even members of Fianna Fáil that they might vote differently on a future confidence motion.

“But I definitely don’t think now is the right time for an election. We need to see Brexit through and we also need to focus in particular in the next few weeks on Northern Ireland and trying to get those institutions back up and running. So my focus is not on elections.”

Asked if he would sit down with Mr Martin to discuss it, Mr Varadkar said he expected to meet him at the beginning of the next parliamentary term.

“I think we’re getting ahead of ourselves a little bit there. First of all we want to see the withdrawal agreement ratified . . . and secondly I think there really has to be a focus between now and January 13th on Northern Ireland and getting the Assembly and Executive up and running.

“I’ve always said that if it is my choice – and it may not be my choice – that the general election in Ireland would happen at the right time for the country. And that’s still not yet.”

Mr Varadkar’s language on the timing of an election was more ambiguous on Friday than previously and was reinforced in speaking notes sent by Fine Gael to TDs. These also spoke of the election being held at the “right time for the country”.

Some Fine Gael sources interpreted the new language from Mr Varadkar as the Taoiseach giving himself political wriggle room to call an election sooner than previously anticipated, should he decide to do so.

The Taoiseach has consistently said his preferred option is to hold the election in May 2020 but has always acknowledged the timing is not entirely in his control, due to his Government being in an extreme minority position in the Dáil.

The Dáil numbers have further tightened since a recent motion of no confidence in Minister for Housing Eoghan Murphy, which the Government won 56-53. The Fine Gael-Independent coalition can no longer be confident of a majority even if Fianna Fáil abstains under the confidence and supply agreement.

Some Fine Gael figures are arguing Mr Varadkar should call an election first before another motion of no confidence is tabled.

Internal Fine Gael speculation has focused on two potential dates. One envisages the Dáil being dissolved on Saturday, February 1st, the day after the UK leaves the EU, for a Friday, February 21st election.

Another would see polling day on February 14th, a week earlier, with the Dáil dissolved after the Brexit withdrawal agreement is ratified but before the UK leaves the EU. One party source suggested such a timetable would allow Mr Varadkar make Brexit a central feature of the campaign.