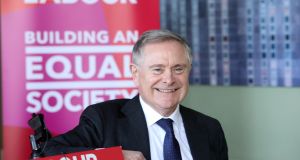 The leader of the Labour party Brendan Howlin has announced his resignation.

Speaking to his colleagues on Wednesday afternoon, Mr Howlin informed them of his intention to stand down as leader once the process to elect a successor has been completed.

He has asked the Labour Party general secretary to begin making the arrangements for the nomination process and the membership election.

Labour’s executive board will meet on Saturday next, February 15th to approve the arrangements for the election of a new leader.

Only party TDs are eligible for the post of party leader, and candidates must be nominated by either two TDs (they can nominate themselves) or five constituency councils. All members of the party have a vote.

A leadership contest will commence immediately, Mr Howlin said, confirming that he will not be a candidate to continue as leader.

It is expected that the Tipperary TD Alan Kelly will be a candidate, though there was no confirmation of his intentions on Wednesday night.

And that’s it folks pic.twitter.com/cTI1htGNcs

Speaking after the meeting of the parliamentary party Mr Howlin said: “It has been an honour to lead the Labour Party but now is the right time to pass on the baton to a new generation. It has been undoubtedly a difficult election for us but I believe we have succeeded in sowing the seeds for future growth.

“I would like to thank all of my colleagues for their support over the last four years, and to thank the party’s members and staff who have put in a huge effort in the recent election as they do between elections.

“I will continue to represent the people of my beloved Wexford to the best of my ability and I thank them wholeheartedly for their continued support.

“I will, of course, offer my total support to my successor when they are elected.”

Mr Howlin resigned after another bruising election for the Labour party, albeit one in which they managed to win new seats with a younger generation of TDs to replace the loss of the seats held by Joan Burton and Jan O’Sullivan. The party won six seats in the general election, down from a high of 37 back in 2011.

Mr Howlin, a former minister for health as well as for public expenditure and reform, said he recommended to the new parliamentary Labour party that it should not enter government as it did not have the “critical mass” to ensure the next government implements its key policies. However, he said, the party would engage with other parties and would support from outside the government measures that achieved these policies.

“If anybody wants to talk to us about a programme for government that we can support from the opposition side, we will happily do that,” he said.

He said that a coalition between two of the three big parties - Fine Gael, Fianna Fail and Sinn Féin - would be necessary to form a government.

Mr Howlin defended the performance of the party under his leadership, insisting that in the circumstances of a surge of support towards Sinn Féin, the party had done “extraordinarily well” to win six seats.

He said he had no regrets as leader and defended Labour’s record in the 2011-16 government, as well as its history as “an agent of change”, listing many of what he said were the party’s achievements in office.

However, he acknowledged that “maybe we took our eye off the ball on the core issue of inequality in terms of wages and wage structures”.

He would not be a candidate to be Ceann Comhairle when the new Dáil meets next week, he said.

Mr Howlin was a highly effective, if controversial, minister in the 2011-16 Fine Gael-Labour government which took office after the EU-IMF bailout in late 2010. As Minister for Public Expenditure, he was key in restoring the public finances to balance, but at the cost of severe cuts in expenditure in many areas - cuts for which Labour was to pay a steep price at the ballot box in the subsequent election.