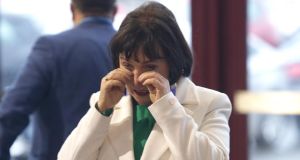 Sinn Féin’s Patricia Ryan joined her party’s surge nationwide, topping the poll on 10,155 votes with a quota of 11,816 and ending on a tally of 12,152 after the sixth count on Monday morning.

She was joined at the count centre on Sunday by Martina Anderson, the former Sinn Féin MEP for Northern Ireland and now an MLA in the Stormont Assembly, and said she was delighted that the support was there and is “very proud” to be a member of Sinn Féin.

Sitting TD Martin Heydon, chair of the Fine Gael parliamentary party, took the constituency’s second seat on Monday afternoon on the eighth count, with a final tally of 11,710 votes.

Serving TD Fiona O’Loughlin lost out on the third seat to Independent candidate Cathal Berry. The former army ranger and military medical officer had begun the count with 5,742 first preferences and ultimately took a seat with a final tally of 10,940.

After the results were announced he said it was certainly one of the big moments in his life. “It’s a great honour,” he explained. “I will say that people didn’t really vote for me, they voted for what we represent which is far bigger and far more important.”

The incoming TD noted that his support base in the Defences Forces “came out in their thousands… and for good reason. They have been exploited for too long and I wouldn’t describe it as anger – I think today was about them showing their resolve, to show that this problem can be solved and must be solved.”