Judicial appointments Bill can be revived by next government - Ross 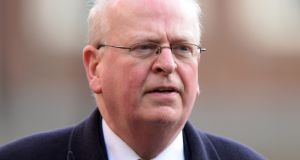 The lapsing of the controversial judicial appointments Bill with the dissolution of the Dáil has been welcomed by members of the judiciary and politicians who opposed it .

The judiciary would “breathe a sigh of relief” that the Judicial Appointments Commission Bill would go no further, said one judge who believed “this piece of proposed legislation is dead in the water now” no matter which party got into government.

Minister for Transport Shane Ross, who championed the legislation to reform how judges are appointed insisted, however, that “it hasn’t gone” and he was “very hopeful it will be revived in its present form” by the next government.

Another judge said there had been a “lot of bad feeling about the bad mouthing [by Mr Ross] of judges generally and the suggestion that some judges, or all judges, were in some way tainted by political associations. I think cronyism was the word used. We don’t really have much of an opportunity to answer back”.

The president of the Association of Judges of Ireland Mr Justice David Barniville said the lapsing of the Bill might be a good opportunity to pause and consider whether there was a need to reform the judicial appointments system and, if so, the extent to which this was necessary.

He said this was particularly the case given how recent appointments to the bench were widely viewed as having been of a high quality.

The Bill had been stalled in the Seanad for almost 18 months after a filibuster led by Independent Senator Michael McDowell, who repeatedly called elements of the legislation unconstitutional.

Mr McDowell said the legislation had been widely opposed including by the Council of Europe, the European Commission, the Judiciary in Ireland, the “great majority of Fine Gael members as well as Fianna Fáil”.

He said it was a “bad thing” the Bill was included in the programme for government by then Taoiseach Enda Kenny as part of the agreement with the Independent Alliance.

Minister for Justice Charlie Flanagan, who had to steer the legislation through both Houses noted that Mr McDowell “has rejected my challenge to stand for the Dáil” but he said “I concede however his record filibuster on judges Bill seems to have succeeded”.

The legislation aimed to restrict the role of politicians and the judiciary in appointing judges and introduced a new commission to advise the Government on appointments, chaired by a non-lawyer and with a non-legal majority.

Mr McDowell defended the 120 hours of debate, the longest in living memory, in the Seanad. He said that while it was called a filibuster it was examined “minutely and at great length” unlike in the US where filibusters involved “reading the telephone book or fairy tales”.

Labour Seanad leader and constitutional lawyer Ivana Bacik said it was “no harm” the Bill would fall but “let’s see if better, more carefully structured and more realistic proposals come through for reforms of judicial appointments from the next government”.

Independent Senator Victor Boyhan said the Seanad debate “in no way delayed or frustrated new judicial appointments. Indeed, this Government appointed over 100 judges since it came into office.”