Is the Green movement now the political mainstream? 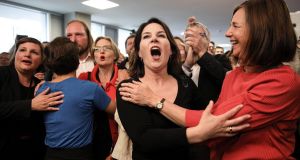 As public transport fans, Greens across Europe have learned the hard way that success is like buses: nothing for ages, then two at once. And this has been one of those successful weeks, one many European Greens have been waiting for longer than a bus on a rainy Dublin evening.

First, in Vienna, Austria’s Greens made history by entering federal government for the first time – 34 years after winning their first national parliamentary seats. After a strong result in last year’s snap general election, the Greens sensed a historic opportunity and set aside deep reserves to join forces with the conservative People’s Party (ÖVP) and its leader, Sebastian Kurz.

Today in Germany, the Greens mark the 40th anniversary of their founding conference in January 1980, buoyed by historic levels of support in opinion polls. For months, all eight different polling companies in Germany place Green support between 20-23 per cent, making them the second-largest political party. In some polls they are just four points short of Angela Merkel’s centre-right Christian Democratic Union (CDU). And, as in Austria, the next federal election – scheduled for next year – could bring a previously unthinkable Green alliance with their one-time ideological enemies in the CDU.

While the German Greens are a strong rival to the CDU, the Austrian Greens are in a position more comparable to the Irish Greens after the 2007 general election. There was a similarity in the post-election courtship: an older, wily, power-obsessed conservative admirer pursues the flushed Green debutante across the political parquet. There was a familiar echo of Fianna Fáil, too, in some Austrian Greens’ concerns that they will be chewed up and discredited by yielding to the charms of the ÖVP.

As in Ireland in 2007, the Vienna cabinet carve-up has left no doubts about seniority, with ÖVP controlling finance, defence, foreign and interior. And Austrian Green leader Werner Kogler admits a calculated gamble with a party that not only has very different views to the Greens on borders, asylum and integration – but also controls the responsible ministries. Mr Kogler hopes to even this out with a clear Green stamp on transport, environment and industrial policy.

Only time will tell if the meagre 20 per cent policy overlap analysts see in the parties’ programmes was enough to enter office, or whether it was illusory to try and protect climate and borders simultaneously.

Further north, the German Greens have come a long way since their first 1980 meeting of ex-student revolutionaries, communists, Maoists, organic farmers and disillusioned Social Democrats. They entered the Bundestag in 1985, many dressed in home-knits and dungarees, prompting CDU chancellor Helmut Kohl to tell his troops to “sit out” the Greens. He also predicted the feuding fundamentalists would implode within two years. Today Kohl is gone, the Greens are entering middle age and, last year, left the late unity chancellor spinning in his grave when they overtook his party in polls for a time as Germany’s most popular political force.

Unlike the Austrians, the Greens already know the price of power. Six months after entering federal office in 1998, Green foreign minister Joschka Fischer braved party conference paint-bombs and cries of “traitor” to win Green backing for postwar Germany’s first military deployment – with Nato troops in Kosovo. That emotional baptism of fire tempered the party’s metal and strengthened its pragmatic “realo” wing over its left-wing pacifists, an influence visible today.

As in Austria, the German Greens’ successful leadership duo Robert Habeck and Annalena Baerbock refuse to place their politics on a left-right spectrum. They prefer instead to frame Green policies as progressive, based on the idea of an open, diverse, sustainable society. Another change – reining in the Green instinct to propose bans on everything – has deprived their rivals of an effective stick to beat them with.

For German Greens, their steady surge in support merely suggests their progressive positions of yesterday are today’s political mainstream. And for them the Greta effect is less the trigger of a surge in Green support than an expression of a new Green reality. Austrian chancellor Sebastian Kurz has embraced this new reality, hoping to rebrand with sustainable conservatism. Will Leo Varadkar, his Vienna opera ball buddy, be next?