Ireland’s voting system: How does it work and how should I use it?

PR-STV, or single transferable vote, is one of most flexible, subtle systems in the world

Ireland's single transferable vote system (STV) of proportional representation is a complex system where the voter has more influence over candidates than almost any other country in Europe. In this 2016 video featuring the late Noel Whelan, we explain how it works. 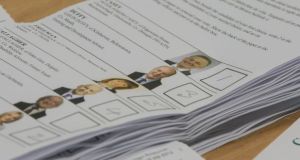 At least half the ballot papers cast on Saturday will not be counted beyond the number one. File photograph: Collins

Our single transferrable vote system of proportional representation – or PR-STV – is one of the most flexible and subtle systems anywhere in the world. It enables voters to support the candidate or party they like best, even if they have little or no chance of being elected, and then using their preferences to ensure that their vote moves on to a candidate with a real chance of making it to the Dáil. While it is not strictly proportional it is much fairer than the straight vote system in the UK or the US.

Should you vote all the way down the ballot paper?

Yes. To maximise the impact of your vote it is best to give every candidate a preference. Give your first preference to the candidate you most want to see elected and then in descending order of preference down to the one you like least.

You don’t have to do this and can stop at whatever point you want and your vote will still be valid but to have maximum impact it is best to use all your preferences. The key thing to remember is that a lower preference can never interfere with a higher one. Your number two will only come into play if your first preference is eliminated or elected and so on.

So how does the system work?

From a voter’s perspective STV is very simple. Just rank the candidates in order of your choice starting with 1. The counting of votes is a different matter and can appear very complicated to the uninitiated. The first thing to understand is that a quota is set for each constituency depending on the number of seats to be filled and the number of people who have voted. The quota is arrived at by dividing the number of valid votes by the number of seats plus one, and then adding one to the resulting total.

For instance if 40,000 votes are cast in a three-seat constituency the quota would be calculated by dividing the number of votes by four and then adding one making it 10,001. The formula means that no more than three people can reach the quota.

How do transfers work?

After the first count when all the number ones have been counted the first thing to happen is that the surplus votes of a successful candidate who has exceeded the quota will be distributed. This is done by checking the second preferences on all the ballot papers of the candidate and distributing his or her number twos in proportion.

When all the first-count surpluses have been distributed the returning officer will then move on to eliminating the candidate with the lowest number of votes. The number twos will be counted and allocated to the other candidates. The next lowest will be eliminated and so on until there are only three candidates left for the three seats.

But where does a number four or five or even lower preference come in?

There is a complication about distributing the surplus of a candidate elected after the first count with the help of transfers. Instead of counting all of the candidate’s votes to allocate the next available preference, only the last bundles of votes received are counted to see where the next preferences goes.

What is meant by tactical voting?

One way of voting tactically is that by going all the way down the ballot paper you can support the candidate or party you want with high preferences while attempting to stop the ones you like least by putting them at the very end.

Another way of voting tactically is that where a party is running more than one candidate, committed supporters are advised to give the number one to the weakest candidate on the ticket to maximise the party’s chances of winning more than one seat. If the candidate is eliminated, the vote will not be wasted as the next preference will automatically be counted.

Are all the preferences on all ballot papers counted?

No. At least half the ballot papers cast on Saturday will not be counted beyond the number one. If the number one goes to a candidate who is in contention for a seat but does not exceed the quota at any stage the second preference will not be counted. Many of the seats will be filled by candidates who fall just short of a quota on the final count. Even if a candidate exceeds the quota after the first count only a small proportion of the next preferences will be counted as part of a surplus.

What is a spoiled vote?

A small proportion of votes are spoiled in every election because the voter has not clearly indicated a preference. This sometimes happens because a number 1 is given to more than one candidate. Often votes are spoiled on purpose with slogans written on the ballot paper by disgruntled voters.

Is the STV system or PR a uniquely Irish one?

No. It was imposed on this country as part of the Home Rule Act in 1912 and later incorporated in the Anglo-Irish Treaty of 1921 with the objective of protecting the unionist minority and ensuring they had representation in an Irish parliament. The system was later included in de Valera’s 1937 constitution and two attempts to abolish it, in 1959 and 1966, were rejected by the electorate. The same system is used in Malta, the Australian senate and Northern Ireland Assembly.