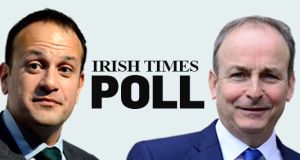 Fianna Fáil enjoys a small lead over Fine Gael following a sharp drop in support for the Government party in recent months, according to the first Irish Times/Ipsos MRBI opinion poll of the general election campaign.

With 19 days to go before the election takes place, Fianna Fáil has taken the lead over its main rival for the first time in three years, while Sinn Féin also performs very strongly in the poll.

The Green Party is also set to make gains, while Independents and smaller parties are on course to lose several Dáil seats.

The poll was taken on Thursday, Friday and Saturday of last week in the days after the election campaign began. The survey was conducted face to face among 1,200 adults at 120 locations in every constituency. The accuracy level is estimated at plus or minus 2.8 per cent.

Excluding undecided voters and those unlikely to vote, 25 per cent of respondents said they would vote for Fianna Fáil (no change), 23 per cent for Fine Gael (down six), 21 per cent for Sinn Féin (up seven), 5 per cent for Labour (down one), 8 per cent for the Green Party (no change) and 18 per cent for Independents and small parties (no change). The comparison is with the most recent Irish Times/Ipsos MRBI poll last October.

Among the Independents and smaller parties, the breakdown shows a number of groups all within the margin of error of each other.

While Fine Gael will be relieved to be only marginally behind Fianna Fáil after a difficult opening week to the campaign (and a poll over the weekend showing a 12-point lead for Fianna Fáil), there are other danger signs for Taoiseach Leo Varadkar in the numbers.

The 23 per cent achieved by the party today is its lowest level of support since before the last election, and if repeated on election day would result in significant seat losses.

And it is Sinn Féin that will be happiest with the findings of the poll, following a substantial seven-point jump in support since October. The recovery in Sinn Féin support comes in all regions but it is still at its weakest in Dublin, where it is in fourth place (at 14 per cent).

However, Sinn Féin optimism will be tempered by the knowledge that the party has previously tended to underperform its opinion poll numbers when it comes to election day.

The Green Party looks to be on course for seat gains on the numbers, and is particularly strong in Dublin, where it is in third place at 15 per cent. The Labour Party faces a fierce struggle to gain new seats.

Personal in-home interviewing took place on 16th, 17th & 18th January 2020. The accuracy level is estimated to be approximately plus or minus 2.8%. In all respects, the survey was conducted within the guidelines laid down by AIMRO, and by ESOMAR.

Since February 2016, a question on voting importance has been included. All respondents are asked how much their vote counts on a scale from 1 to 10 where 1 means it “makes no difference” and 10 means it “makes all the difference”. Those answering 1 to this question are treated as non-voters and are excluded from our party preference calculation, along with those who don’t know how they will vote or say they will not vote.

Extracts from the report may be quoted or published on condition that due acknowledgement is given to The Irish Times and Ipsos MRBI.