‘How did I do?’ Relaxed Taoiseach gives little away, except a broad smile 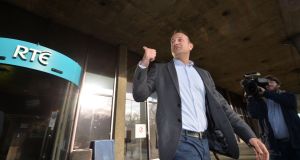 Dressed casually and with only the Government press secretary accompanying him, he stopped briefly for a chat before heading into the studio of RTÉ’s ‘This Week’ programme. Still, he was giving nothing away.

The question of “will he, won’t he” call a general election has been all that anyone in political circles has talked about for the last number of weeks.

The truth is that the vast majority of politicians have grown weary of the 32nd Dáil and many have been encouraging the Taoiseach to go now and announce a February election.

In studio, presenter David McCullagh wasted no time in questioning Varadkar on his intentions.

“It is the responsibly and duty, or prerogative, of the Taoiseach to request a dissolution of the Dáil and that is a duty which I take very seriously. I have always said it should only happen when it is the right time for the country,” said Varadkar.

He said his view was always that the right time was in the summer of this year.

“But”, he added, “I have to acknowledge that circumstances have changed.”

Many politicians, members of the public and even political journalists, had tuned in with the hope that there would be clarity at last, and those outside the studio held their breath.

“We have the institutions up and running in Northern Ireland. and also the arithmetic of the Dáil has changed, and that is the reality of that.”

A quick beat, and then: “I have made a decision.”

For the moment, he is not telling us what that decision is. The Taoiseach said he has some unfinished business to wrap up before he sets the date, including a meeting with Fianna Fáil leader Micheál Martin which is expected to happen early in the week, a Cabinet meeting on Tuesday and a visit from the new head of the European Commission Ursula Von der Leyen on Wednesday.

But with the Government facing a defeat in a motion of no-confidence in Minister for Health Simon Harris which is due to be tabled on February 5th, the writing is on the wall.

It would appear the Taoiseach has known this for quite some time, and most likely it became fully evident when the Government narrowly survived December’s motion of no confidence in Minister for Housing Eoghan Murphy.

Many of the Independent TDs who normally gave their support made noises about not being in a position to offer the same backing the next time around.

Compounding the problem was the fact that Fianna Fáil TD John McGuinness said he would not be in a position to comply with the confidence and supply arrangement and abstain on such key votes any more. Instead, he said he would have to vote against the Government.

“That is a factor I have to take into account as well,” Varadkar said, adding that the division in Fianna Fáil made it almost impossible for them to honour the confidence and supply agreement.

“I asked him (Martin) for assurances that he would be able to lead and deliver his own party and it seems from the news today, that he wouldn’t... which is unfortunate because any Taoiseach or party leader needs to be able to have their own party behind them,” he said, in what was one of the interview’s more cutting remarks.

With nothing more to say on the topic, Mr Varadkar went on to begin a defence of his party’s record in Government.

The message appeared to be that the health and housing crisis will take years to solve, and won’t be possible without a recovering economy.

Privately, many Fine Gael TDs say that they are being told by higher echelons in the party to make the economy a key plank of their election messaging.

After the interview, the Taoiseach arrived into a room adjoining the studio and, smiling broadly, asked “how did I do?”

After a brief chat, he left, still holding on to the last piece of information everyone is looking for: the date of the election.

Regardless, it would appear that the campaign has begun.