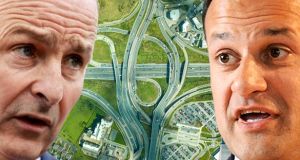 There is an apocryphal quote that is often attributed to the late US president Lyndon Johnson about the vagaries of elections. After losing a particularly bitterly-fought election, he is reputed to have said: “The people have spoken, the b**tards.”

Predicting election campaigns in Ireland is a guessing game and inexact science. Opinion polls and the results of secondary elections such as council elections, byelections and European elections give you the direction of the wind. But the system in Ireland of multi-seat constituencies, allied with transferable votes, makes it a very difficult exercise to carry out with any degree of accuracy.

No pre-election tally in 2016 would have predicted that Bríd Smith of People Before Profit would win the last seat in Dublin South Central by fewer than 40 votes from Fianna Fáil’s Catherine Ardagh, based wholly on the distribution of a tiny surplus that had got Joan Collins over the line in a previous count.

National opinion polls offer a guide to the overall picture. If a party’s support is steeply rising – or falling – that will indeed be reflected in the outcome. However, each and every constituency must be examined to get a sense of the relative strengths of each party and Independent.

For example, the next Dáíl will have two more seats – 160 – than the outgoing one – 158 – bringing extra seats for Cavan-Monaghan, Kildare South and Dublin Central. Meanwhile, Laois and Offaly rejoin, but with five seats, not six.

In Dún Laoghaire, Fine Gael had three seats out of four in the last election by virtue of the fact that the then outgoing ceann comhairle Seán Barrett was a TD there. It’s not going to retain those.

Easy gains for the two big parties will happen in some places before a blow is struck in anger. There are four Dublin constituencies where Fianna Fáil has no seats. It will be hoping for a gain in each of them –Dún Laoghaire, Dublin Central, Dublin North West and Dublin South Central.

The party will also be looking for extra seats in a range of constituencies from Kerry to Cork East, to Clare, to Galway East, to Limerick City, Longford-Westmeath, to Carlow-Kilkenny. With 13 or 14 biddable targets, Fianna Fáil is looking at the high fifties on a very good day.

However, it faces battles in Wicklow, Sligo-Leitrim and Kildare North.

Fine Gael, too, has obvious hopes for gains. It has no seat in Tipperary and should regain one – in 2016, it had a full quota but ended up with nothing. Likewise it is favourite to win the extra seat in Cavan-Monaghan.

That’s what the constituencies tell us at this moment in time, based on opinion polls, candidate selection, the elections earlier this year and the 2016 elections. The campaign will provide its own dynamic.

It will be only then that politicians can judge the mood of the electorate. If there is a massive shift where people want change, they may look elsewhere than Fianna Fáil to the Greens, to Independents, and to Labour.

Sinn Féin had terrible May elections but may have got a fillip in the byelections. Still, it is hard to see how the party can hold on to all the seats it has at the moment. On a very bad day it could lose eight seats or more.

Conversely, if the Green Party local election surge is repeated then they could triple their seats, and on a very good day – think the Spring Tide or the Gilmore Gale – move comfortably into double figures.

For its part, Labour looks like it has halted its fall and may recover enough to win nine or 10 seats if it can edge wins in Waterford, Cork North Central, Dublin Bay North and Waterford.

The 33rd Dáil does, however, look like it will have fewer Independent TDs.

There are always dark horses and unexpected results. In this election they could come in the shape of Marian Harkin, Verona Murphy, Paul Gogarty, Saoirse McHugh and Malcolm Noonan.

Finglas-based Paul McAuliffe topped the poll for Fianna Fáil in the local elections and is Dublin’s current Lord Mayor. Fine Gael’s Noel Rock relied hugely on Labour transfers to pip him last time out. McAuliffe is hot favourite to reverse the 2016 result.

This moves from a three to a four-seat constituency. Fianna Fáil needs to win here but the battle will also feature the Greens, the Social Democrats and Labour.

Catherine Ardagh lost by fewer than 40 votes in 2016. She has had a high profile since and Fianna Fáil did well in the local election. The only seat safe here is the Sinn Féin seat.

Tuam may well decide the outcome. Independent Seán Canney is defending the seat. Fine Gael has chosen a strong councillor, Peter Roche. But Fianna Fáil won four out of seven council seats in Tuam, giving it an edge. One of the key battlegrounds.

Labour will struggle to hold the seat long held by Willie Penrose. The battle looks likely to be a Longford battle for the last seat between Fine Gael and Fianna Fáil candidates.

If the Greens do not win here then there is no Green surge coming. Fianna Fáil has a quota and must win if it is to be in power. But what then gives? Can Richard Boyd Barrett be edged out? If he is, it will mean a near wipeout for Solidarity-People Before Profit. Could Fine Gael end up with just one seat?

Fine Gael must win here if it is to stay as the Dáil’s biggest party. But to do so it will have to take out Shane Ross. It’s a fickle constituency and his first preferences have been falling. But it will be a big scalp.

One of the few places where Fianna Fáil is vulnerable. Fianna Fáil and Fine Gael always battle for the last seat. This time John Paul O’Shea might be strong enough to take out one of the two Moynihans, Michael or Aindrias.

One of the few seats where Sinn Féin has hopes of a gain. If Pádraig Mac Lochlainn wins, it could prove symptomatic of a poor day for Independent candidates.

Fianna Fáil has a strong chance of three out of five seats. Carlow-based Jennifer Murnane O’Connor was close in 2016 for the party. Sinn Féin’s support dropped precipitously in the local elections and Kathleen Funchion’s seat is vulnerable. If Fianna Fáil is having a good day, this will be its seat for the taking.

Another Sinn Féin vulnerable seat, it looks like it will be a race between Fine Gael and Fianna Fáil. Will Willie O’Dea share his vote sufficiently with James Collins? If the Greens are having a really strong day, they will be in the running. Sinn Féin’s Maurice Quinlivan is a strong candidate but the tide has ebbed fiercely for the left in this constituency.