Government formation talks to continue, breakthrough not expected this week 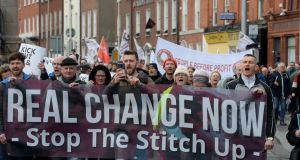 Coalition of groups march from the Garden of Remembrance to support the Stop the Fine Gael/Fianna Fáil Stitch Up demonstration on Saturday. Photograph: Alan Betson

Government formation talks will continue this week, but with the Taoiseach Leo Varadkar flying to the United States on Tuesday for the annual St Patrick’s Day visit, there is little expectation of a breakthrough.

While senior figures in Fine Gael and Fianna Fáil have been in contact in recent days, Fine Gael’s position remains that while it will engage in policy talks with other parties, it is not at this stage willing to talk about the formation of a government.

Mr Varadkar has not sought a mandate from his parliamentary party for such talks, and with the Dáil adjourned until March 19th there is no meeting of the party’s TDs scheduled for this week.

However, some senior figures in the party, including Minister for Finance Paschal Donohoe, Minister for Foreign Affairs Simon Coveney and other Ministers are thought to favour an intensification of the contacts with Fianna Fáil.

Fianna Fáil remains open to coalition negotiations, and is expected to meet with Green Party TDs and independents this week.

TDs in all parties believe that the worsening coronavirus outbreak will force the pace of government formation when the Dáil returns after the St Patrick’s Day break – and possibly before then.

On Sunday, the Fianna Fáil justice spokesman Jim O’Callaghan said he would “go along with” a government of national unity if one was proposed.

Mr O’Callaghan also said that the party may have been “too definitive” in ruling out entering government with Sinn Féin before the general election and said that Fianna Fáil had said the same about Fine Gael.

Within Fianna Fáil Mr O’Callaghan’s remarks were seen by some as a message to critics of party leader Micheál Martin, some of whom have touted him as a potential alternative leader. However, sources loyal to Mr Martin pointed out that Mr O’Callaghan had said after the election that he would not serve in a government with Sinn Féin. A party spokesman said there was “no change” in the party’s position towards Sinn Féin.

Mr O’Callaghan’s remarks caused concern in Fine Gael and the Government’s official spokesman issued a statement saying the “reasons why Sinn Féin should not participate in government are even more valid in an emergency, particularly when it comes to national security, the Garda, the Defence Forces and the justice system.

“Covid-19 will be with us for many months and should not prevent a new government from taking office at the appropriate time. However the appointment of a new government would not make it any easier to deal with Covid-19 in the short term,” the spokesman said.

“It would mean over a hundred people taking up new roles across government, many of whom would have no prior experience of government or their new role, and would have to devote time to read into their new brief.”

Nonetheless, Mr O’Callaghan’s comments will add to the pressure on the Fianna Fáil leader, who has not yet persuaded Fine Gael to enter formal talks on a new government, and faces opposition in his own party when he does.

On Saturday, close to 300 people gathered in Dublin’s city centre protesting against a possible Fianna Fáil-Fine Gael government coalition or “stitch up”.

Organised by People Before Profit, the demonstration started outside the Garden of Remembrance on Parnell Square before moving to the Spire on O’Connell Street with dozens of people carrying posters with the words, “Kick out FF&FG” accompanied by chants of “Leo, Leo, Leo, out! Out! Out!”.

Solidarity People Before Profit TD Bríd Smith, who led the speeches before the protest began, described negotiations between Fianna Fáil and Fine Gael to form the next government as “shameful”.

Paul Murphy of the Rise political party said “establishment parties” were attempting to stymie the change that was voted for on February 8th. He also encouraged Sinn Féin to participate in future protests and called for “a left government or at least an alternative government that excludes both Fianna Fáil and Fine Gael”.