Dr Cathal Berry, who left the Defence Forces last year, was elected as an Independent TD in Kildare South 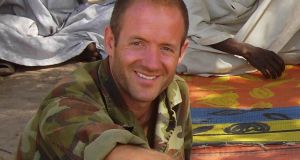 Former Army Ranger Wing commander Dr Cathal Berry has said he is open to supporting a Sinn Féin government following his election to the Dáil as an Independent in Kildare South.

Dr Berry, a GP, left the Defence Forces last year to campaign for better pay and conditions for members. His victory on Monday, at the expense of Fianna Fáil incumbent Fiona O’Loughlin, surprised many.

A former second in command of the Army’s elite unit, Dr Berry served in Chad and Kosovo before qualifying as a doctor.

Speaking on Monday, he said he would be happy to work with all sides of the house including Sinn Féin. “If it makes sense lets do it, regardless of the source of the idea.”

Dr Berry described himself as a pragmatist who is neither left or right wing. “I wouldn’t like to lay myself on any part of the spectrum. I’m a free thinker, I’m capable of independent thought.”

At least some of his victory can be ascribed to the large number of military families living in Kildare South close to Defence Forces Headquarters at the Curragh Camp.

It is understood Dr Berry won 600 of 800 postal votes. Personnel like gardaí, prison officers and Defence Forces members are automatically entitled to a postal vote.

“It always felt right but it was only in the last 24 hours that we realised something big was going to happen.”

Dr Berry said he was far from a single issue candidate. “I would say the opposite. I grew up a farmer, joined as a solider, then became a doctor.”

He said his main focus in the Dáil would be on health and he hoped to get on both the Oireachtas Health and Foreign Affairs, Trade and Defence Committees and possibly a junior minister post in any coalition government.

“He was kind of hoping to hold on for another few weeks but it wasn’t to be unfortunately. He was in palliative care for a while so it wasn’t a complete surprise but I suspect he would have liked to be around for today.”