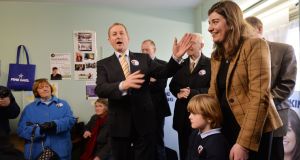 Fine Gael candidate for Roscommon-Galway, Senator Maura Hopkins, has announced she will not contest the forthcoming general election.

Ms Hopkins said it would be “too difficult to run” following the birth of her first child prior to Christmas. “The timing of the election doesn’t really suit.” She said the decision “was not one I wanted to make”

“I am very aware of the huge demands and sacrifices involved in running an effective and successful campaign to win a Dáil seat.

“All indications suggest that a general election will take place over the next number of months. It had been my full intention to contest the election.

“However, my personal circumstances have changed in recent weeks. As a new mother and as a female public representative based in a rural constituency, I have come to the conclusion that it would not be possible to balance the responsibilities and demands of my personal and professional life. Therefore, I am withdrawing my name as a Fine Gael Candidate for Roscommon-Galway constituency.”

Ms Hopkins said she would support Fine Gael candidate, Cllr Aisling Dolan “and any other candidate the party may decide to run in the forthcoming election”.

It is unclear if Ms Hopkins will bid to defend her Senate seat following the general election. “I still intend to remain involved in Fine Gael politics”, she said.

An occupational therapist and a graduate of Trinity College Dublin, she hails from Edmondstown, outside Ballaghaderreen on the Roscommon Sligo border.