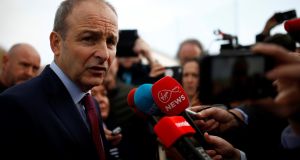 Fianna Fáil leader Micheál Martin: some senior party TDs believe he would have to stand aside if Fianna Fáil remains in opposition. Photograph: Reuters/Henry Nicholls

The formation of a Fianna Fáil-led minority administration underpinned from the opposition benches by Fine Gael is not being ruled out by senior party figures.

Party leader Micheál Martin has long believed that a government led by him involving smaller parties such as the Green Party, the Social Democrats and Labour, and facilitated by Fine Gael, is a viable option.

However, Fianna Fáil’s poor election performance, which saw it drop from 46 seats to 38, has made such an arrangement a more difficult prospect. Mr Martin made contact with the leaders of the smaller parties on Tuesday.

Labour leader Brendan Howlin is expected to tell his parliamentary party on Wednesday it is his view that his party, which won six seats, did not achieve the critical mass in the election to enable it to enter government. Sources said Mr Howlin would leave open the possibility of Labour supporting a government from opposition on key policy areas such as housing.

The 33rd Dáil has 160 seats, and 80 of these would be need to have a majority once a Ceann Comhairle is elected. The Green Party won 12 seats, and along with six each for Labour and the Social Democrats could provide a bloc of 24 Dáil votes to add to Fianna Fáil’s 38 TDs.

If Fine Gael was to agree to a confidence and supply arrangement its 35 TDs would abstain on budgetary and confidence votes, and only 63 votes would be needed for a Dáil majority.

Fianna Fáil, the Greens, Labour and the Social Democrats could command 62 votes, meaning the support of a number of Independent TDs would also be needed.

In advance of the election, Fine Gael leader Leo Varadkar said he would be open to facilitating a Fianna Fáil-led minority government if Mr Martin had more Dáil seats.

However, Tánaiste Simon Coveney has in recent days played down such a prospect. A significant number of Fianna Fáil and Fine Gael TDs would also be strongly opposed.

Fianna Fáil TDs are now solidly of the view that Sinn Féin leader Mary Lou McDonald should form a left-wing arrangement, and say there are enough non-Fine Gael and Fianna Fáil TDs in the Dáil to elect her as Taoiseach.

Views are still split, however, on whether Fianna Fáil should be open to entering government with either Sinn Féin or Fine Gael, with a number of TDs strongly opposed to each option.

Dublin Bay South Fianna Fáil TD Jim O’Callaghan on Tuesday told RTÉ’s Drivetime that he would refuse to serve in a Fianna Fáil-Sinn Féin government, although he would not resign from his party if such a coalition were formed.

The Fianna Fáil parliamentary party will meet on Thursday to discuss the fallout from the election. Mr O’Callaghan has been mentioned as a potential leader by some senior TDs who believe Mr Martin would have to stand aside if Fianna Fáil remains in opposition.

Another TD said the party’s election policy platform was not strong enough. “I think our policies on housing were lacking. They just weren’t good enough. What was it, giving ten grand to developers?”