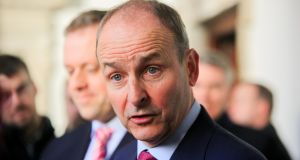 Fianna Fáil leader Micheál Martin ‘needs Fine Gael to save his own political career. But many of us don’t want that,’ said one TD. Photograph: Gareth Chaney/Collins

Despite returning as the largest party in the Dáil, Fianna Fáil is in a state of deeper unease and uncertainty than at any time since its sharp fall in the wake of the financial crisis.

After a few weeks of relative calm since the general election, the fear and tension in Fianna Fáil burst into the open last Thursday at a meeting of the parliamentary party. The prelude was an interview with Seán O’Rourke on RTÉ Radio that morning in which party leader Micheál Martin admitted, in almost a smothered way, that Fianna Fáil was willing to forge a coalition with Fine Gael and might be open to the idea of a revolving taoiseach.

Some TDs were taken aback and later vented their frustration at the election campaign and at the trenchant stance taken by Martin over Sinn Féin.

“It was a tetchy meeting,” texted one TD afterwards. “He was told we need to stop making the same mistakes. A lot of people felt the leader needed to move on from attacking Sinn Féin and focus on getting his own house in order.

“The leader got annoyed at the end. He scolded people for, as he felt, being hot and cold on Sinn Féin. He said we had a meeting last week and that was the time to say if people thought different. I think he lost a lot of people with that rebuke at the end.

“We were giving him space and gently telling him the fourth floor [leader’s office] needs to up its game, and he turns it back on us as if we were bold schoolchildren.”

There were some who were critical including Jackie Cahill from Tipperary and the Westmeath TD Robert Troy, who riled Martin after referring to the influence of Fianna Fáil’s unelected officials. Sean Fleming and Longford TD Joe Flaherty also spoke disapprovingly of the recurring criticism of Sinn Féin, describing it as counterproductive.

James Lawless pointed to the big losses sustained by the party in the commuting counties and its weak transport policies. For once, the two most vocal advocates of discussions with Sinn Féin, Eamon Ó Cuív and John McGuinness, were not lone voices.

The Irish Times spoke to more than 20 TDs and former TDs in the past week to ascertain their views on the party’s standing, future and Micheál Martin’s leadership, and on the decision to exclude Sinn Féin from government. All but two spoke on condition of anonymity.

There were mixed views on all the issues, but one clear consensus emerged: Martin was “over-obsessed” with Sinn Féin and needed to stop talking about the rival party. However, a majority of those who spoke did not favour an arrangement with Mary Lou McDonald.

“A [Fianna Fáil-Fine Gael] government will be the most unpopular of all time,” said Flaherty. “It will have to make sure it lasts the full term of five years and fulfils all its promises.”

“They might not be happy with it but the country needs a stable government.”

It was also evident there was no strong swell of opinion in favour of ousting the leader. Most feel there is no obvious replacement in the ranks right now.

“The first thing I’ll say is: there is no danger to the boss at all,” said a second-term TD. “He is safe. Though the party is not. There are no outcomes that are politically palatable because we are in a brand new world.

“He’s ruled out Sinn Féin, so we have to go with him on that. We might not like it but it will be our only choice.”

For others. ignoring Sinn Féin is a big mistake.

“Micheál is in the last-chance saloon. He needs Fine Gael to save his own political career. But many of us don’t want that. We would rather Sinn Féin. If we go in with Fine Gael, we would be destroyed in the next election.”

On this question there is deep division. One of those who believes there should be a new party leader nonetheless strongly agrees with Martin’s stance over Sinn Féin. “We can’t forget these guys wanted to spend €22.5 billion. They said it was all costed by the Department of Finance but that’s like a kid going into a €1 shop with a €1 coin and because everything costs €1 thinking they can buy the whole shop. It’s ludicrous.”

When you talk to TDs from Border counties, the western seaboard and the midlands, you hear that grassroots sentiment would sway more to Sinn Féin than to Fine Gael.

Most say if the party’s policy on Sinn Féin were to change, Martin would have no choice but to fall on his sword. Some TDs based in urban areas said that going in with Fine Gael would also mean the support of a generation of working-class supporters might never be recovered.

“We have always been the party of the aspiring working class and we have lost many of them,” said one.

“I do not think you can exclude parties from talks like we have,” says another TD based in the east. “I am no fan of Sinn Féin but that plays with the outsider narrative they have.”

He sums up the views of many of his colleagues. “There are big issues for the party. I think Micheál will stay as leader and we will eventually do a deal with Fine Gael. That’s going to be difficult for us and the government will have to perform strongly.

“I would not be calling for his head. But he must learn to listen to his colleagues and to make changes.”

Martin has been there for almost a decade. There is low-level talk of finding a successor to renew the party. If Fianna Fáil goes into opposition, or does a deal with Sinn Féin, or if there is another election, he is unlikely to survive.

“He has one shot and only one shot,” says another party TD, “and he is wholly dependent on Leo Varadkar to do a deal. Fine Gael and the other parties hold all the cards. We have none.”