Election 2020: Varadkar says he has made decision on election but will not reveal date yet

Taoiseach indicated he will dissolve Dáil in the coming days 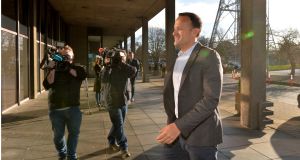 Taoiseach Leo Varadkar arriving at RTÉ studios in Dublin for an interview on the ‘This Week’ programme. Photograph: Alan Betson

The Taoiseach has said “circumstances have changed” since his previously stated desire to hold an election in May 2020, as he indicated he will dissolve the Dáil in the coming days.

Mr Varadkar was speaking on RTÉ’s radio’s ‘This Week’ programme and said he has made a decision on when to hold an election, but said there is “respect and protocol” around how he seeks a dissolution of the Dáil.

He said it was always his view that “the right time would be the summer of 2020” but added that he had to “acknowledge that circumstances have changed” in terms of the Dáil arithmetic.

“I’ll end any uncertainty as soon as I can,” Mr Varadkar said, before adding that the Cabinet will meet on Tuesday and the Dáil will reconvene on Wednesday after the Christmas recess. He said he will meet his ministers and Opposition leaders before making an election decisions.

“I have always said that that it should only happen when it is the right time for the country and it has been my view for a long time now that the right time would be the summer of 2020. But I have to acknowledge that circumstances have changed. We have a deal on Brexit and in many ways that was the big job of this Government, our magnum opus, to secure a deal on Brexit,” Mr Varadkar said.

“We have the institutions up and running in Northern Ireland which the Tánaiste and I have put a huge amount of work into but particularly the Tánaiste but the arithmetic in Dáil has changed and that is the reality of that so I have made a decision but there is some unfinished business to do which I want to get done.”

He also said people should be wary of promises made by his political rivals in the “next couple of weeks”, firmly indicating an impending election campaign.

“I’ll end any uncertainty I as soon as I can. Bit of unfinished business to do, which I want to get done, which is important around European Affairs and British-Irish affairs and then also out of respect to others I need to speak to the Cabinet, our good colleagues in government and also the leaders of the Opposition.”

He would not confirm if he will meet UK prime minister Boris Johnson in the coming days.

Speculation has been growing that Mr Varadkar will call a general election in the coming days and the vote would take place in early February.

Although he spoke of EU matters, so with @vonderleyen here on Wednesday it could pitch dissolution into Thursday.

With a no-confidence motion in Minister for Health Simon Harris due to be heard in the Dáil on February 5th, it was unclear on Sunday if the Government would have enough support to carry that vote - a situation that would push the country to an election before that.

A number of rural independent TDs have said they intend to put down the motion in Mr Harris. Independent TDs Mattie McGrath, Michael Collins, Peter Fitzpatrick and Michael Harty among others were expected to support the motion, meaning the Government would be reliant on the support of Noel Grealish, Denis Naughten and Mr Lowry for survival.

Last night, Mr Lowry said he does not believe the mooted motion would go ahead, as he expects Mr Varadkar will call an election before any debate in the Dáil could take place. Meanwhile, reports on Sunday suggest Mr Grealish may not vote with the Government and Fianna Fáil TD John McGuinness said before Christmas that he would ignore the confidence-and-supply deal between his party and Fine Gael by voting against the Government if another motion was put forward.

Under that deal Fianna Fáil agrees to abstain in key votes, thereby allowing the minority Fine Gael-led Government to stay in power. Mr Varadkar and Fianna Fáil leader Micheál Martin met on Thursday to discuss the future of that arrangement and the timing for the next general election but left their parties and the wider Dáil in suspense and agreed to meet again this week.

Mr Varadkar has said he is planning to reconvene the Dáil on Wednesday as he indicated it was still his personal preference to hold an election in the summer.

Speaking on his way into a Fine Gael meeting on Friday, he said “if there is any change in that I will let you know”.

But many Fine Gael TDs are privately calling for a election in February with two potential election dates on either February 7th or February 14th mooted in recent days.

A meeting of the Fine Gael executive council, due to take place on Saturday, was postponed due to the “fluid political environment”, according to a source. The meeting had been arranged to set out work for Q1 of this year.

Mr Lowry on Saturday said he does not believe a motion of no confidence in Mr Harris will go ahead. In a statement issued to the media on Saturday evening, Mr Lowry said his assessment of the current political circumstances leads him to the “firm conclusion that the current Dáil will not be given an opportunity to debate a confidence motion in Health Minister Simon Harris”.

“Dáil procedures dictate that this confidence motion will not be heard until February 5th,” he added.

“I expect the Taoiseach will exercise his prerogative to call an election which will be well underway by February 5th, therefore speculation on my voting intentions is immaterial and irrelevant.”

Mr Varadkar said on Friday that he believes he has enough support to win a vote of no confidence in Mr Harris.

“I think we will have the numbers for that, actually. I’ve lost count of the number of confidence motions that have been put down over the last couple of years. They’re all defeated, and they’re largely done so that individual members of the Opposition or particular Opposition parties can get some air-time, and that’s the game and they’re playing it, fair enough, but let’s not take it too serious.”

When asked if he was going to contact the TDs for their support, Mr Varadkar said he would “think about that over the weekend”.

Earlier on Friday the Taoiseach indicated that he did not want to rush into an election decision.

“When you’re in politics you always have to be prepared for an election. At the same time you can always be better prepared for election, but that’s not what matters.

“And I think sometimes when people rush into decisions they may get the accolade of being decisive, but they actually make the wrong decisions. And before I make a decision I always consider all the options and all the facts.”