Election 2020: The factors that will determine who becomes taoiseach

Economic conditions will play a role, but the campaign itself will decide the electoral outcome 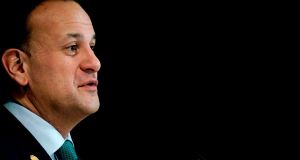 There’s a huge question mark over how effective a campaigner Fine Gael leader Leo Varadkar will be: even those close to him concede that they don’t know. Photograph: Kenzo Tribouillard/AFP via Getty

Brexit postponed a general election that would otherwise have occurred in 2019 as the confidence and supply agreement came to the end of its agreed three-year term. But there is no postponing it beyond 2020. The question that will face Leo Varadkar this new year is how to bring his Government and this Dáil to an end.

Varadkar can seek to have the election in May – and he would probably succeed. Fianna Fáil leader Micheál Martin is clearly willing to facilitate it, and enough independents could be found to shore up his majority for a few months.

But there is fierce pressure within Fine Gael to go sooner rather than later, to call the election in January and have it in February. That is now the expectation in Government. Either way, there will be a general election in the first half of the year. But what will happen when that election finally takes place? Who is the likely winner? And how do we even judge that, when one of the big two parties could win more seats than its rival but still end up in opposition?

Micheál Martin can campaign for a change, perhaps the most powerful political trope of all

For now, Micheál Martin seems to have a slight edge. His organisation is in mostly good shape and he appears to have a more straightforward route to picking up a few seats in a few constituencies than Varadkar does. Fine Gael will have to answer to voters for the state of the health service and the housing shortage. And Martin has put in the groundwork with the smaller parties such as Labour and the Greens to pave the way for a post-election coalition, should the Dáil numbers stack up.

If the election were a game of football or hurling, Martin would be playing with the wind – he can campaign for a change, perhaps the most powerful political trope of all. If Varadkar wins, it would be a third Fine Gael-led administration in a row. In hurling and in football and in politics three-in-a-rows are rare.

So watch how Fine Gael strives to ridicule the notion of Micheál Martin – a member of Bertie Ahern and Brian Cowen’s cabinets and a TD when Charles Haughey was taoiseach – as the candidate of change.

But the Government also has advantages, too. As the British general election showed, big things matter, and the big things – the economy, living standards, wages, Brexit – are pluses for Fine Gael.

It is no longer the case – as it was in 2016 – that the economic recovery has not reached great swathes of the population. No doubt there are people who have not experienced the benefits of the recovery; but they will be far fewer in number than they were in 2016. Talking about the recovery will no longer annoy loads of people.

Minister for Finance Paschal Donohoe has skilfully managed the political expectations, resisting the temptation to splurge on a pre-election budget in the way many of his predecessors did not. In doing so, he restored at least some of the fiscal credibility that recent budgets and rampant overspending had drained from Fine Gael.

Will it be enough? It certainly puts Fine Gael in the game, bolstering the necessary trustworthiness for the promise of tax cuts that is likely to be central to Fine Gael’s offering. Of course, it’s a lot easier to lose your credibility than it is to regain it.

Brexit is the Government’s other major card – which is why there is such a push in parts of Fine Gael for an early election. Many in the party believe an election held as soon as possible after the UK’s planned departure from the EU on January 31st gives Varadkar the best chance of capitalising on the Government’s widely-praised (not least by itself) handling of the Brexit hand grenade.

All that we know already before the election is called. But until it actually comes, we will not know about two important and potentially decisive factors: the context in which the election takes place; and the three or four weeks of actual full-on campaigning before polling day.

The possible contexts vary widely, with Brexit and the economy, crowded hospitals and record homelessness all playing greater or lesser roles.

But the campaign is even less predictable. Varadkar was elected leader of his party in large part because his TDs believed he could connect better with voters and win more seats (their seats) for Fine Gael. They believed in his ability to campaign.

And yet Varadkar is not a natural campaigner, itching to get out and meet the people, like some politicians. He can be awkward and stiff on the campaign trail, and while people are interested in him and impressed by him in the flesh, sometimes he doesn’t seem to have much to say to them when he actually meets them.

In other words, there’s a huge question mark over how effective a campaigner Varadkar will be: even those close to him concede that they don’t know. It could be a triumph. Or it could be a disaster. There’s only one way of finding out.

How Varadkar campaigns is important because the general election is shaping up to be the biggest head-to-head between the leaders of Fine Gael and Fianna Fáil since the battles between Garret FitzGerald and Charles Haughey in the 1980s. The debates between the two men will be especially important.

The campaign when it starts will have an immediately equalising effect between Government and Opposition in the media. Governments, having the power of executive action, the resources of the Civil Service and a cadre of spin-doctors and advisers, tend to dominate media coverage during “peacetime”. But during campaigns, broadcast media must give proportional coverage to different parties, resulting in a major jump in coverage of the opposition.

What of the other parties? Sinn Féin received a major boost in two recent elections, winning a byelection in Dublin Mid-West and taking Nigel Dodds’s seat in North Belfast in the British general election. But the party’s vote slumped across Northern Ireland, and both these polls and the May local elections in the South suggest the party is in for a difficult general election. The election will be about minimising losses.

Mary Lou McDonald has to face political headwinds in a way that Gerry Adams – during his period in southern politics anyway – did not have to. McDonald has a desire and a rationale for government but no apparent route to it. She faces falling poll numbers, a jumpy organisation and a sceptical public. How she responds – and how the electorate responds to her – will decide the immediate future for Sinn Féin.

The Labour Party has targeted a small number of constituencies where it needs to be successful to give the party a future. Senators like Aodhán Ó Ríordáin and Ged Nash need to win back their Dáil seats to give the party a meaningful presence in the next Dáil. Only then will the difficult question of government become a realistic option. Labour could enter government as part of a broader left alliance with the Social Democrats, Independents and Greens – but only if personality clashes can be overcome, and few in Leinster House are optimistic about that.

Of the smaller parties, the Greens will approach next year’s election with the greatest optimism. The reality of climate change has provided the party with a political engine that could see the party return with a multiple of the two seats it won at the last election. It could become indispensable in the formation of the next government. The climate crisis will do the campaigning for the Green Party: it just needs to have good candidates in place to take advantage of it, and to make sure its voters, especially younger people, turn out on the day.

The evidence of the local and European elections suggests it can make a significant breakthrough.

In a larger sense, this year’s election will show us whether the great realignment of Irish politics that took place after the financial crash and subsequent recession is settling down into predictable patterns.

For much of the State’s history, the shape of Irish politics has been predictable: the “two-and-a-half party system”, with occasional walk-on parts for new forces such as the Progressive Democrats.

In recent years, this has been a more European-style system, with two big – but smaller than they were – parties, and an archipelago of smaller groups, some of which combine to support one of the big two in Government. That in turn requires a long and often painstaking process of government formation. That is what is likely to follow the long-awaited 2020 election.