Election 2020: Taoiseach and Micheál Martin at odds over timing of vote 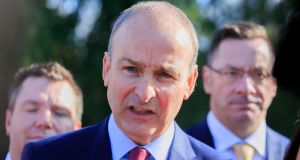 Fianna Fáil has raised the prospect of Micheál Martin and Taoiseach Leo Varadkar settling on a timetable next spring in which the general election can be held.

Mr Varadkar ruled out calling an election until there is clarity on Brexit, and restated his preference for a May 2020 poll. He told a meeting of Fine Gael Ministers that while an election now may be the best time for his party, it is not the best time for the country. He said he is Taoiseach first and Fine Gael leader second. He also said 80 per cent of people who had contacted him on the issue were in favour of a November election.

“I don’t think it is the right thing for the country, not with the ongoing uncertainty around Brexit,” he said. “We don’t know what is going to happen on the 12th of December.”

It could take weeks or months to form a government in Dublin, and he did not want to “put Ireland in that position” in advance of the Brexit deadline of January 31st. The UK may leave on December 31st, however, if the House of Commons and European Parliament ratify the withdrawal agreement in December.

Asked if he and Mr Martin could agree an election date, Mr Varadkar said an accompanying policy programme would also be needed. He said the Fianna Fáil leader had already turned down his offer to agree a date in May.

A spokesman for Mr Martin said: “The Taoiseach has said May and Micheál has said spring/Easter. There’s a difference of a couple of weeks between the two, which I am sure they can sort between them.”

On any potential policy agreement, the spokesman added: “There’s a lorry load of Bills that we’ve already agreed to before committee at the moment, 58. Plus obvious ones like mandatory reporting that haven’t even got that far yet.

“There is plenty to keep everyone busy. There has been enough messing. Ministers need to get on with it and do their jobs.”