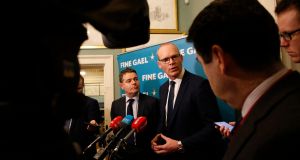 “Fine Gael will play on the strong economy, the budget surplus and record employment – with plenty of digs at Fianna Fáil’s record during the last period of strong growth.” Photograph: Nick Bradshaw

The key battleground for the election is already becoming clear. Fine Gael will play on the strong economy, the budget surplus and record employment – with plenty of digs at Fianna Fáil’s record during the last period of strong growth.

Fianna Fáil will point to its role in supporting the economic policies of recent years – via the confidence and supply deal – and go full tilt at the Government’s record in areas like health and housing, as will the other Opposition parties.

The conventional political wisdom, from the opinion polls and the European and local elections last summer, is that, for voters, the strong economy is to an extent taken for granted and that the health and housing issues will dominate. But we just don’t know – and that is what will make it so fascinating in the run-up to election day on February 8th.

The last general election that followed a period of strong growth was in 2007, when the Fianna Fáil incumbents, led by Bertie Ahern, were re-elected. General elections are different from local and European polls – the policies of those elected have a direct impact on people’s pockets.

While the backdrop of hospital trolleys could hardly be more difficult for Fine Gael, the general performance of the economy could hardly be better. Total employment has risen by 200,000 to a record 2.326 million since the last general election and is up 425,000 since Fine Gael took office after the 2011 poll.

The budget is now in surplus and earnings – after a period when they were flat up to late 2015 – are now rising.

Fine Gael will also play the Brexit card – the navigating of the Brexit talks which has helped to avoid a crash out at the end of this month and the associated threat of controls and checks at the Irish Border.

Expect to see a lot of Ministers Simon Coveney and Paschal Donohoe in the media during the campaign as the twin themes of the economy and Brexit are played up.

The economic record is not perfect.The Government has faced criticism from the State’s budget watchdog, the Irish Fiscal Advisory Council, and others for spending overruns – notably in health – which have taken up much of the additional corporation tax revenues received.

However, Donohoe used the Brexit threat to present a tight budget package for this year, pushing the exchequer further into surplus and leaving some leeway if corporation tax falls off in the years ahead. So the traditional pre-budget giveaways were avoided – and Fine Gael will make a virtue of this strategy.

For voters it will come down, in part, to trust. Who do you trust to keep the economy on track – in so far as any government can – and to spend the resources to improve key services to the public ?

And who do you trust to make the right decisions if we get hit by a slowdown, or just slower growth, in the years ahead?

Sustainability and climate change will also be a key theme in the wider economic debate – and it will be interesting to see how the bigger parties try to limit the gains the Greens might make here .

Much of the debate will be about the key battlegrounds of health and housing, with the Opposition arguing that improvements have been absent or way too slow, and Fine Gael saying that it had to stabilise the economy first before upping spending, and that progress is now being made.

The difficulty for the public is judging where the parties’ priorities lie. In election campaigns, parties usually try to please everyone – they will use the favourable exchequer outlook to promise strong budgets and more spending, a better health service, more houses, and so on.

Fine Gael might even throw in a promise of lower income taxes, even if its record in government has been that the vast bulk of additional budget resources went on higher spending. It will be interesting to see how the tax debate plays and to what extent Fine Gael tries to use it as a point of difference.

Economic policy is all about priorities – and choices. And we can’t bank on corporation tax continuing to soar– even if it may not collapse. An acceleration in government spending would mean higher taxes – or quite possibly moving back into deficit. Voters need to have the trade-offs made clear.

Where should priorities lie if there is a Brexit shock next year, or a big hit to corporation tax, or whatever? After all, if we have learned anything from the last couple of decades, it is that we can’t have it every way – and we shouldn’t believe anyone who tells us we can.