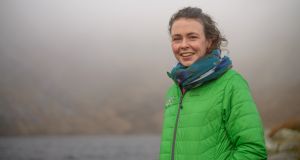 Saoirse McHugh: she has a big personality, but a victory would still be a big deal. Photograph: Andrew Hamilton

In every election, there are surprises. Remember Moosajee Bhamjee, a psychiatrist who won a seat in Labour “Spring Tide” in 1992 in Clare?

McHugh performed well for the Greens in the European Parliament elections in the Midlands North-West constituency, but the Greens have just 1 per cent support in the constituency in which she is now running. However, Mayo backed Mulranny GP Jerry Cowley previously. McHugh has a big personality, but a victory would still be a big deal.

Casey’s decision to stand affects the two Inishowen candidates, Charlie McConalogue and Pádraig Mac Lochlainn. Casey’s appeal has been on the slide for the past year and he failed to live up to his own expectations in the European elections. Still, potential for disruption.

Harkin is a huge vote-getter and was courted by Fine Gael. It is difficult to see her not winning a seat in her former constituency, which she represented as a TD before being elected an MEP. Fianna Fáil would be the obvious casualty.

The Green councillor is based in Kilkenny city but this mainly rural constituency has had a Green TD: Carlow-based Mary White. The party’s local election support was relatively low but if there is a gale behind the Greens, Noonan could be one of its unexpected TDs.

Connemara businessman Ó Céidigh, a Senator, is well known in the constituency and has been approached in the past by most parties. If he stood, either as an independent or for a party, he would be in immediate contention for a seat.

Another disrupter. Murphy’s controversial comments on immigration have been divisive but she has shown she can attract a vote. Her candidacy will be of particular concern to Fine Gael.