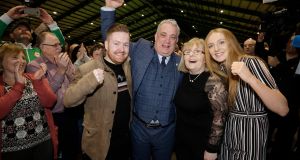 Aengus Ó Snodaigh, with his family in the RDS count centre in Dublin, was elected after the first count. Photograph: Damien Eagers/The Irish Times

Long-time Sinn Féin TD Aengus Ó Snodaigh topped the poll, and without a running mate his transfers brought Bríd Smith (People Before Profit-Solidarity) over the line on the second count.

Symptomatic of the national shift neither of the two traditional main parties won a seat in the four seat constituency, which includes areas such as Inchicore, Drimnagh and Ballyfermot.

Fianna Fáil senator Catherine Ardagh failed to gain a seat and was eliminated on the fifth count, a big blow to the party, who have performed below their expectations in Dublin.

Ó Snodaigh topped the poll with a massive 17,015 first preferences, some 39 per cent of the vote. He said it was “regretful” the party did not run two candidates, given he received nearly twice the quota. Following the disappointing local election results last year the party took senator Máire Devine off the ticket to shore up Ó Snodaigh’s seat.

Smith was elected on the second count, taking half of the available transfers from the Sinn Féin surplus.

After a disappointing start with nine per cent of the vote Costello received a strong surge of transfers from the eliminated centre-left candidates Rebecca Moynihan (Labour) and Tara Deasy (Social Democrats), to leapfrog ahead of Ardagh, Collins and Byrne on the fifth count.

Costello took the third seat with 8,560 votes after Ardagh’s transfers were counted, pulling him clearly ahead of Collins and Byrne.

The Independents4Change TD retained her seat, finishing on 7,807 votes, ahead of Byrne’s 7,431 votes on the sixth and final count. Collins also polled poorly in the first count with less than seven per cent of the vote, but benefitted from a steady stream of left wing transfers from Ó Snodaigh and then Smith, to keep her in contention.

Costello is a first time Green TD, and previously topped the poll in the Kimmage-Rathmines ward in last May’s local elections. He is the partner of Hazel Chu, who is the party chair and a councillor in the Pembroke ward of Dublin City Council.

In the 2016 general election the final Dublin South Central seat was decided by a margin of just 35 votes after four days of counting, with Smith taking it ahead of Ardagh.

Byrne is one of several FG TDs to lose seats in the election, with Regina Doherty, Mary Mitchell O’Connor and Noel Rock other high profile casualties.

Gay Mitchell held the Fine Gael seat in the constituency from 1981 until 2007, when Byrne was elected. Her vote was down significantly on her 2016 general election performance, in a race where it was tipped she would lose her seat that time but held on.