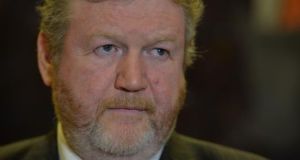 The Sinn Féin wave swept through Fingal like many other parts of the country, with the party’s health spokeswoman Louise Reilly being elected on the first count, with a surplus of over 5,000 votes. File Photograph: Alan Betson

The Sinn Féin wave swept through Fingal like many other parts of the country, with the party’s health spokeswoman Louise Reilly being elected on the first count, with a surplus of over 5,000 votes.

Fianna Fáil housing spokesman Darragh O’Brien retained his seat comfortably as did Joe O’Brien of the Green Party who was first elected in a byelection in the constituency late last year.

Fine Gael also held on to its single seat in Fingal with Alan Farrell being returned on the 11th count.

However the final seat was a dog fight between Duncan Smith of the Labour Party and independent candidate Dean Mulligan. The Labour Party has held a seat in north county Dublin for many years with Sean Ryan and later Brendan Ryan.

Mr Mulligan is a councillor from Swords and was backed by former local TD and current MEP Clare Daly.

On the 12th count and after a re-check of votes, Smith was declared elected without reaching the quota.

The election result saw the final bow in politics of former Fine Gael Minister and deputy leader James Reilly who failed in his attempt to regain the seat he had lost in 2016.

Mr Reilly said after his elimination on the eight count that he was retiring from public life after 13 years in politics. However on his way out he also suggested that if Fine Gael was not in government it should take a long look at whether Leo Varadkar should continue as leader and be the person to rebuild the party.

Mr Farrell on the other hand strongly praised Varadkar as a decent man in whom he had absolute faith.

Darragh O’Brien after his election reiterated his opposition to Fianna Fáil going into coalition with Sinn Féin.

Joe O’Brien said the Green Party’s position has been that it is willing to sit down at the table with all those elected to have discussions. He said this was only respectful.