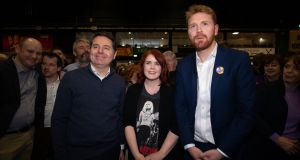 All four candidates in Dublin Central have been elected with Sinn Féin leader Mary Lou McDonald topping the poll.

On the final count, the Green Party candidate Neasa Hourigan was elected alongside Fine Gael’s Paschal Donohoe and Gary Gannon of the Social Democrats.

With a 35 per cent first preference vote, her transfers largely distributed amongst left-leaning parties like Solidarity-People Before Profit and to Christy Burke (Ind) and Gary Gannon (SD).

After the eighth count, Fianna Fáil’s Mary Fitzpatrick was eliminated leaving four candidates scrapping out for the last seat. Mr Burke was unsuccessful after the final count.

Speaking after her election, Ms Hourigan said that the Green Party’s red line for government would be action on climate change.

“This is beyond what we had any right to expect and I am totally blown away.”

“We have trebled our representatives, trebled our vote. It has been a brilliant election. We fought it on our own basis and talked about the climate emergency and the next ten years. We are going to get better at communicating those issues.”

In relation to future coalition partners she said: “Our only red line issue is climate action. We think that impacts all areas of our lives. We want to see climate action. The manifestos of the three large parties were not particularly ambitious or good on climate change.”

Mr Donohoe said that the “foundation of staying in politics is an absolute commitment to representing your constituency.”

On the issue of Leo Varadkar’s future as leader, Mr Donohoe said he “absolutely supports” him.

He said the process of reflecting on the election would be best led by Mr Varadkar. He said that the party will not change its stance on entering Government with Sinn Féin.