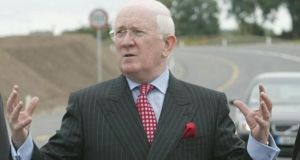 The veteran Fianna Fáil politician, Pat the Cope Gallagher, has lost his seat in Donegal after more than four decades as an elected representative in the county. Photograph: The Irish Times

As in Donegal as in the rest of the country it was Sinn Féin’s election, with its two candidates, Pearse Doherty and Pádraig MacLochlainn taking a whopping 45.1 per cent of the first preference votes between them.

From the first tallies on Sunday, it was clear both candidates were going to be returned; “Sinn Féin are running away with it,” went one overheard conversation.

Both were elected on the first count, with Mr Doherty coming in more than 8,000 over the quota with 21,044 first preferences.

Should they have run another candidate? Mr Doherty said those discussions would happen after the election.

“There may be areas after this that we could have looked [at] and said there could have been a different strategy, but I don’t think there’s any party that won’t have those conversations,” he said.

“That’s always the case in terms of elections. If we had a crystal ball it would make things a lot easier but it’s a good question to be able to ask yourself after the election.”

In the Aura leisure centre in Letterkenny, it was so far, so straightforward; the race for the remaining three seats was anything but.

From early on Monday morning it was clear that four former TDs would be vying for the final three seats in the constituency.

The lead shifted. The Independent Thomas Pringle, who received 5,472 first preferences, rose through the rankings; at one stage it appeared as if the outgoing education minister, Joe McHugh, would be the one to lose out.

On the 9th count Mr Pringle, Mr McHugh and Fianna Fáil’s Charlie McConalogue – who had topped the poll in 2016 – were elected without reaching the quota; the faller was the veteran Fianna Fáil representative Pat the Cope Gallagher.

A fixture in politics in Donegal, he was elected to the council in 1979 and became a TD in 1981; he and was Leas-Cheann Comhairle in the last Dáil.

He put his defeat down to “transfers of course, and the Sinn Féin tsunami. We all suffered as a result of it,” he said. “I didn’t think it would happen to me but it has happened and I think there’s only one winner and that’s my wife.”

Donegal had moved “to the left”, as Mr Pringle’s representatives sang as he was elected; it certainly appeared so, with three out of the constituency’s five TDs now in that bracket.

As in Donegal, so it was throughout Ireland. “It’s dramatic,” was how an elated Mr MacLochlainn put it. “I think this might be the first time in the history of the state that the progressive side of politics as the majority in Irish politics, and that’s very exciting for our people.”