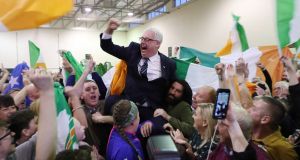 Fine Gael Senator Colm Burke has made it to Dáil Eireann, winning the third seat in Cork North-Central some 38 years after he first contested the constituency for the party.

Mr Barry stayed ahead of Mr O’Flynn all the way to the 14th count. The distribution of Mr Moran’s vote saw the margin widen to 2,349, allowing the outgoing TD to take the last seat without reaching the quota.

An emotional Mr Burke (63) was flanked by his wife, Mary McCaffrey, as he was congratulated by Tánaiste Simon Coveney and former Fine Gael TD Bernard Allen.

“Personally, I am delighted – there was such a team effort made by the organisation and working as a team we delivered the votes and delivered the seat for Fine Gael in Cork North-Central,” he said.

Mr Burke ran in last November’s byelection caused by the election of Fianna Fáil’s Billy Kelleher to the European Parliament. While he increased Fine Gael’s share of the vote to 20 per cent, he failed to take the seat.

Radio host and former Fine Gael minister Ivan Yates predicted that Mr Burke would not win a seat in Cork North-Central this time round, but Mr Burke was in a generous mood when asked about it after his success.

“Ivan doesn’t always get it right – none of us are perfect. I am waiting for the congratulations card from Ivan in due course,” he said.