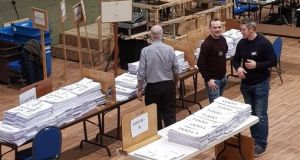 Sinn Féin’s Matt Carthy has topped the poll in Cavan-Monaghan, ahead of Minister for Business Heather Humphreys. Photograph: Jack Horgan-Jones

The final two seats in Cavan-Monaghan have been won by Fianna Fáil, with neither candidate achieving a quota.

His party colleague Niamh Smyth took the fifth and final seat on the same count, polling a total of 10,951 votes.

While Fine Gael’s TP O’Reilly stayed in the hunt until the closing stages of the contest, and polled some 8,646 votes in the final reckoning, his election was always unlikely given the relative weakeness of the Fine Gael vote in the constituency, compared to what had been expected and what the party had hoped for.

Minister for Business Heather Humphreys, who was elected on the first count but beaten into second place by Sinn Féin’s Matt Carthy, could not bring through a running mate despite her status as a senior Cabinet Minister and running in a constituency that went from four seats to five.

Instead, it was Mr Carthy who brought through his running mate, Pauline Tully, who was elected on the second count, courtesy of a heavy transfer from the Sinn Féin MEP - some 3,291 votes, or almost 77 per cent of his surplus, which travelled across county lines from Monaghan to Cavan.

In his speech following completion of the count, Mr Carthy spoke of a “seismic shift” in the politics of the State “that we have not seen in many decades”. “Things will never be the same again,” he said. “All of us have a responsibility to try and ensure the change people demanded last Saturday is implemented.”

He paid tribute to retiring Sinn Féin deputy Caoimhghín Ó Caoláin, who has served the constituency since 1997, a sentiment echoed by all elected TDs, across party lines. Ms Humphreys said he had been a “great representative for many, many long years”.

Ms Tully thanked her two children “for their patience and understanding, and the intensely busy last three weeks, when they barely saw me”.

Mr Smith also paid tribute to his family. “It’s not possible for us to function as public representatives without the support of our families.

“Don’t take democracy for granted, it’s a precious thing we have in our society,” Mr Smith said in tribute to the volunteers who supported the campaigns and count.

Party colleague Ms Smyth said it had been a “tough day nationally and locally too” for the Fianna Fáil party, and she also paid tribute to Mr Ó Caoláin.

The Green Party’s candidate, Tate Donnelly, who was the youngest candidate in the country, performed well, winning 4,187 votes and surviving until the eighth count.

The Sinn Féin victory came following a campaign directed by Mr Ó Caoláin. Speaking at the count centre, before the final result was announced, he said the general election “is the coming of age of Sinn Féin, in terms of contemporary relevance in politics in this State”.

“It’s the shaking of a tree that hasn’t been really rattled over the decades before; the tweedledum and tweedledee dominance. Different attempts have been made to impact on that, but I really do believe this time something very different has happened.”

Mr Ó Caoláin, who is now retiring from elected politics, said the door had been closed on Sinn Féin entering into government throughout his time in the Dáil. He said this was primarily due to “a wish on the part of those who have dominated the political landscape in this State since its formation to maintain the status quo”.

“But that is now going to change.

“I do regret the fact that I didn’t have the opportunity to be part of a government experience. I would have liked to take on the challenge of a portfolio responsibility, I would not have shirked or baulked at the idea, I would have been open to it,” he said.

He said Sinn Féin’s association with physical force republicanism and the IRA was historical. “We are talking about a period of time now decades past; a new generation of young people that never were a part of, in any shape or form, all of that.

“It’s only through dialogue and engagement that we can hope to find a formula that will allow us to move on from the entrenchment of the past into a new and fertile future, where really and truly, and maybe for the first time, all the children of the nation will be cherished equally,” he said.

He defended Sinn Féin Waterford TD David Cullinane after a video of him saying “Up the ‘Ra” emerged following his election. Shown the video of Mr Cullinane by The Irish Times, he said “I don’t think that it is the offensive reference you’re suggesting in the wider context.

“It’s not something I think is as inappropriate in terms of the context where people were celebrating success and it has to be seen in the context of that; it’s language, it’s reference and it’s historic. It’s historic. Not contemporary and that’s very important to make that distinction,” Mr Ó Caoláin said.