Analysis: Smaller parties will seek to elbow into debate with sharp and distinctive messages 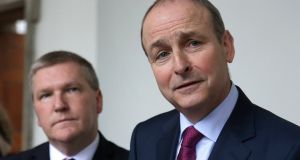 Taoiseach Leo Varadkar decided there was no point hanging around, and rather than wait for it to return tomorrow, he will travel to Áras an Uachtaráin later today to ask the President to formally bring the 32nd Dáil to an end.

Ministers remain ministers until someone else takes over, but TDs will no longer be TDs.

The election will take place on February 8th, which is a Saturday. This is unusual - recent elections have all been held on a Friday, and before that they were held on Thursdays. It paves the way for a campaign that will be three-and-a-half weeks long - though it may feel longer.

Like the last two general elections, a February poll, and a campaign fought not on long summer evenings - as Varadkar had initially suggested - but in the dark, wet and cold of winter.

That will enhance the importance of the “air war” - a campaign fought in the media and over the airwaves - while the “ground war” of knocking on doors and personally engaging voters will be more difficult.

Difficult but still important - election studies consistently emphasise the importance in the Irish electoral system of personal approaches to voters. For all the complaints that they are insulated from the lives of ordinary people, Irish politicians in all parties remain remarkably close to the electorate.

If they don’t, they lose their seats. All politicians suffer from extreme anxiety about their own seats at election time.

Campaigning will be frantic and cacophonous in the coming days as the parties stake out their territory and attack their opponents.

Party managers will be opening up their campaign headquarters today and rolling out the message and activity grids they have finalised in recent weeks and which plot out the daily business of the campaigns for all parties.

The big two parties will slug it out on their respective records in government and their plans for the future. Elections are about the future, but the credibility of the parties’ promises is influenced greatly by their behaviour in the past.

The smaller parties will seek to elbow their way into the debate with sharp and distinctive messages.

They’ll get less airtime and fewer column inches than the big parties, so making full use of the coverage they do get is imperative. Spinning from everyone will be dialled up to the maximum immediately.

Polls suggest the most open election in many years. The last Irish Times/Ipsos MRBI poll in October gave Fine Gael a small lead, but figures in both big parties accept that there is little between them.

Both reckon they can gain seats - but who can gain the most? Fine Gael goes into the campaign with 47 seats, Fianna Fáil with 46, but all the Fianna Fáil TDs are standing for re-election, whereas Fine Gael has several high profile retirees, like Michael Noonan, Enda Kenny and Sean Barrett.

And neither of the big parties will come anywhere near the 80 seats required for a majority when the new Dáil meets. That means that the question of how and with whom the next government is formed - derided by Micheál Martin during the last election as “coalitionology” - will be a central one for this campaign. Both big parties are ruling out Sinn Féin, a stance they will be repeatedly required to justify.

But the Greens (especially), Labour, the Social Democrats, independents and small parties will also be required to spell out their intentions.

A long period of government formation is likely to follow the meeting of a new Dáil, with the numbers dictating the realm of the possible. A return to some form of confidence and supply is not impossible.

The transformation of the Irish political landscape as a result of the economic crash of 2008-2011 has meant that government formation is now a much more difficult business.

In a way, there are two phases in deciding the future leadership of the country - the election, in which the voters get their say, and then the construction of the new government, in which it’s over to the politicians.

The winner of the first phase has the advantage in the second.