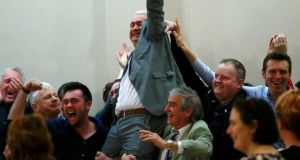 Fianna Fáil’s Declan Breathnach celebrates after being elected during the second day of the election count in Dundalk. Photograph: Darren Staples/Reuters 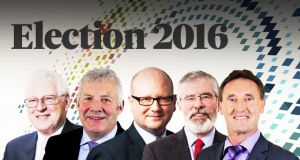 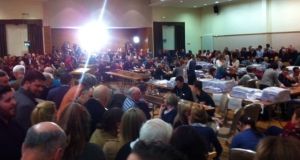 Votes being counted in Louth ahead of first round results. Photograph: Mark Hilliard 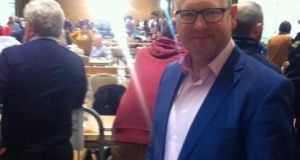 Ged Nash of the Labour Party.

Labour minister Ged Nash lost his seat in Louth after a fight that went to the 11th count, adding another heavy blow to the party.

The Drogheda TD said he would reflect on what comes next but that he would stand should there be another general election.

Gerry Adams was dethroned as Louth’s poll-topping TD on Sunday but his re-election helped Sinn Féin to an historic two-seat victory in the northeast, alongside Imelda Munster. Ms Munster becomes the first woman to represent Louth in the Dáil.

Fine Gael held their two seats occupied by stalwart Fergus O’Dowd and Peter Fitzpatrick who both returned on the final count, neither reaching the 11,255 quota. In the end, Mr Nash was less than 400 votes behind Mr Fitzpatrick and Mr O’Dowd was not far ahead of either.

“The Labour Party is not going away and neither am I,” said a bruised Mr Nash in the aftermath of defeat.

“We had a difficult election. The reality was that we were being squeezed on every side.”

He backed Joan Burton’s leadership “every step of the way” and said the party must now focus on how best to reassert itself and find its identity.

“It’s a great shame that the Labour Party is going back into the Dáil in greatly diminished numbers,” he said.

“Working people and people who depend on public services in this country will have a greatly weakened voice.”

Louth delivered for Sinn Féin here but Mr Adams was unwavering in his insistence the party would play no subordinate role in government.

He had been delivering a well-drilled message throughout the count regarding the negative conduct of the 2016 campaign and the swelling appetite for political change.

“We sought a mandate for government,” he said shortly after being elected. “We will have to wait until all the seats are filled. We have made this very, very clear in the course of the election campaign that we will not go in as a junior partner to these conservative parties whether it’s Fine Gael or Fianna Fáil.”

Fianna Fáil’s resurgence came in the shape of Declan Breathnach, a former Dundalk school principal and councillor of 25 years’ experience, sweeping Mr Adams aside to take a seat with 12,192 votes to his competitor’s 11,278.

Mr Breathnach was more open to the idea of entering government on his first election, even if it meant joining forces with Fine Gael.

He said he would support a coalition if it was the “best option” and if his party were certain to be in a strong position of influence.

“When the numbers are crunched it’s incumbent on every elected TD to try and provide stability providing we have an influence over a more caring Ireland,” he said.

Ms Munster said having secured the third seat: “Labour let the people down. They were elected to go in and stand up for people. They had promised that they would keep manners on Fine Gael. They did the exact opposite: they rolled over and they became Fine Gael light.”