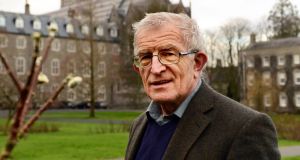 Group spokesman David Walsh, a retired mathematician from NUI Maynooth, said maleness and what it is to be a man were being overlooked in society, with unhealthy consequences. Photograph: Cyril Byrne/The Irish Times

The treatment of men in Irish society should be a general election issue, according to campaign group Men’s Voices 2016.

Arguing that Ireland has become “an increasingly cold place” for men, the group is asking all candidates to consider what it calls the unequal treatment of men and boys and to agree to take up issues of male equality if elected.

Responses so far from outgoing TDs and other candidates have been “positive” and all will eventually be posted on the group’s website, mensvoices2016.com, a spokesman said.

The organisation’s concerns fall into two broad categories. The first is what the group calls the “generally negative message on men and maleness”; the second relates to the focus of family law and consequent operating of family courts.

The group was formed some 18 months ago and has a small core of 12-15 activists. Group spokesman David Walsh, a retired mathematician from NUI Maynooth, said maleness and what it is to be a man were being overlooked in society, with unhealthy consequences.

These include the facts that the male/female suicide ratio is about four to one; boys have fallen behind in education, with university intake now about 60 per cent female to 40 per cent male; and up to 85 per cent of homeless people are men.

“This report goes into a lot of detail into what is happening to boys at school,” said Dr Walsh. “They believe boys need separate attention. Boys tend to be a little more raucous than girls at schools and are not as well-behaved in some instances. But they need rough-and-tumble play, not a sort of unisex approach that suppresses their natural behaviour.”

He said boys and adolescents needed to be helped learn and understand what it means to be a man, which is different from being a woman and is not about being macho or aggressive.

He said there was a 44 per cent increase during 2015 in the number of boys inflicting self-harm compared to the previous year. “That to us is a striking manifestation of some malaise going on with boys. There’s something bothering them and it needs to be discovered and articulated,” he said.

“The acute injustices suffered by men in family courts have their roots in structures, attitudes and legislation formulated without any account being taken of the needs and interests of men and fathers,” the group said.

It also claims men suffer the consequences of false allegations of rape and child abuse. It says Ireland has one of the highest European rates of false rape allegations “yet our law provides no deterring repercussions for false accusers”.

Domestic violence as an issue is focused almost wholly on women which does not reflect the evidence, according to Dr Walsh.

“UK statistics suggest that about 40 per cent of victims are men,” he said.

The issue of men being the victims of domestic violence “is consistently ignored or trivialised”.

Dr Walsh also said the recently signed but not yet ratified Council of Europe Istanbul Convention on Preventing and Combating Violence Against Women and Domestic Violence was “gender-specific and a highly discriminatory document”.