Why does the art world love jargon? It adds up to an impenetrable language that puts people off visiting galleries they might otherwise love 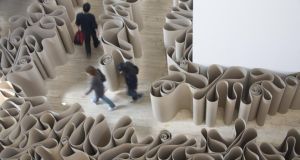 Have you ever wandered into an exhibition and thought, Ah, yes, this really does problematise the aesthetics of space? Do you sit down on a Saturday evening with your pals to chinwag about “considering the experience of viewing” or “positioning the image as surface”? Thought not. The problem is that many artists, and people in galleries who write about art, seem to think we do. Or, if not, they’ve decided it’s not us they’re speaking to.

As I write about art, both for a living and because I love it, the authors of these texts probably think I am their target audience. So why does my heart sink and my soul shrivel a little more every time I open another press release or artist’s statement to read about problematising juxtapositions, positing relationships and subversive inversions of space?

Not only is a great deal of it meaningless, if you go to the trouble of working out what it’s saying, but artspeak destroys one of art’s great abilities: to communicate ideas in the space beyond words. It probably also dissuades at least 90 per cent of the population from discovering how much they might love what’s going on inside our galleries.

Which begs a question: why do people do it? Jargon and cliche are not confined to the arts; all professions have their languages. Mechanics need to refer to tappets just as surgeons use a technical shorthand to get their work done, and you need only the advent of a constitutional referendum for a “substantive issue” to rear its head. The problem arises when the language is used to exclude.

For many, being inducted into artspeak – or International Art English, as I read it being called in a blog by Patricia Tsouros on Artfetch. com – means feeling included in a group at the heart of the art world. It’s rather like a verbal Masonic handshake. What they don’t realise is that many who speak it don’t enjoy it but feel, rather like being part of an arms race, that they can’t opt out.

David Levine, an artist, and Alix Rule, a PhD student, exposed artspeak last year in an article in the online magazine Triple Canopy, tracing it to the journal October, founded in 1976, which brought French theoretical texts into the process of writing about art. This made things much more difficult and added the appearance of cleverness.

October was hugely influential. Its new language went beyond words to include grammatical characteristics such as the adverbial phrases that are a favourite of art texts – “radically questioning” – paired terms, and as many dependent clauses as possible.

Learn the tricks and anyone can write artspeak. Google “International Art English” and you can find websites that will generate some for you.

But why do such a terrible thing to art? Here is one of October’s editors, Rosalind Krauss, writing in the journal in 1979 about Rodin’s sculptures: “Their failure is also encoded on to the very surface of these works: the doors having been gouged away and anti-structurally encrusted to the point where they bear their inoperative condition on their face.” Poor Rodin.

Mask for insecurity
One reason for the prevalence of artspeak is that artists and curators are taught it in colleges and are often told that you need complex language to convey complex ideas. This is nonsense. It acts as a mask for insecurity, and the temptations, beyond those of feeling part of the group and part of a profession, are obvious.

Apart from the fact that it’s simple to write, once you get the hang of it, convoluted language can impart seeming depth to slight or poor work, and this does art no favours.

At the Frieze London art fair last month I saw artspeak everywhere, overstating some substandard art – art that was, as my grandmother might have said, all mouth and trousers.

It doesn’t have to be that way, though. Good writing on art is out there, writing that is clear, lucid and unpretentious yet influential. In his brilliant series of Reith lectures, currently being broadcast on BBC Radio 4, the Turner Prize-winning artist Grayson Perry talks about the closed circle of the art world and about his desire to avoid “sucking up to an academic elite”. His thesis is that “anyone can have a life in art; even me, an Essex transvestite potter”.

I took part in a recent seminar run by Arts Audiences, at the Irish Museum of Modern Art, with the award-winning copywriter Eoghan Nolan, of Brand Artillery, that aimed to clean up the mucky language many people use when writing about art. Feelings in the group were mixed, as some seemed to think that critical – that is, convoluted – language was necessary to grab the attention of the international art set. Others were keen to embrace the idea that clear writing doesn’t mean dumbing down.

Internationally, things are changing too. At this year’s Venice Biennale, artspeak seemed, with some stunning exceptions, to be on the wane. (From Brazil: “Fervenza has achieved unparalleled medium hibridity, manifested in a brilliant enduement of the exhibition space.”)

This language is also going out of fashion in the US. The sooner it does, the better, so that more people see how much they can enjoy the art world, and so that second-rate art has fewer refuges. In the meantime, and as an antidote, I recommend reading Levine and Rule’s genuine art press release, which they reformatted as blank verse:

Peter Rogiers is toiling through the
matter

with synthetic resin and cast aluminum

an oblique and “different” imagery

out of sync with what we recognise
in “our” world.