What’s on the agenda of the new Minister for Arts?

Heather Humphreys’s lack of an arts background was much discussed when she was made the Minister for the sector, but she is showing herself to be capable, intelligent and engaged 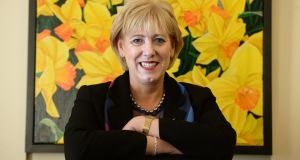 Art at work: Heather Humphreys in her office with a painting by Steven Mannion Farrell. Photograph: Cyril Byrne

Since the surprise appointment of Heather Humphreys as Minister for Arts, Heritage and the Gaeltacht in July’s Cabinet reshuffle, art-world luminaries and putative powerbrokers have been eyeing her up as if they were prospective partners at a country dance.

Their aims have been both to get the measure of the Cavan-Monaghan TD – elected to the Dáil only in 2011 – and to become the ones to influence her.

More recently there have been mutterings of the honeymoon period’s waning, and grumbling that she – shock-horror – reads her speeches.

But what has it been like for Humphreys? What does it say about the art world that this intelligent woman hadn’t spent more time darkening its doors until it became her job to do so? And how telling is it that, in a country that prides itself on creativity, there was no other obvious candidate for the role?

Humphreys is practical about the matter. “I’m a businesswoman,” she says when we meet in her office on Kildare Street, where the art on the walls is a mixture of work she owns (a lush painting of daffodils by Steven Mannion Farrell and a pair of Orla de Brí sculptures) and works from the OPW collection, including a haunting Eithne Jordan painting of snowfall in an empty courtyard.

“My background is management” – she has worked with Ulster Bank and before her election managed her local credit union – “If I see something that needs to be done, I’ll do it.”

So what needs to be done first? She outlines the benefits of the arts to society and in terms of health and tourism. But alongside unravelling the tangled knots of different demands in an art world that has been steadily bled of funds since the recession began, there are obvious issues that were sitting on her desk like time bombs when she walked through the door.

Deenihan’s proposed amalgamation of the national cultural institutions is off the table.

She is meeting New Beginning, the socially focused debt-relief group that offered to buy the Bord Gáis Energy Theatre from Nama on behalf of the nation, but “I don’t know if it’s going to work out”.

Alternatively, could the State negotiate an annual slot for more cultural programming, such as during Dublin Theatre Festival? “We can encourge and say this is a good idea, and I can work with whoever it ends up with. But in terms of the State taking over the actual theatre, I think, Where are we going to get the money from, number one?”

Humphreys is a fan of Culture Ireland, the body that supports Irish artists touring abroad, and believes it’s doing good and necessary work.

She is adept at nudging questions sideways. Her department’s relationship with the Arts Council – whose role is to support artists – has always been troubled. Humphreys knows the council’s chairwoman, Sheila Pratschke, from Pratschke’s time as director of the Tyrone Guthrie Centre, at Annaghmakerrig, in Humphreys’s constituency. She pronounces both Pratschke and Orlaith McBride, the council’s director, very capable.

She also believes that financial support for the arts is vital, although her business background shines through as she elaborates: “If you’re an artist it can take years before you’re recognised, before you get any financial gain from it.”

Also on her desk has been the issue of whether the department has a fund of €6 million or so a year that it hands out without a full tendering procedure, to projects including Limerick City of Culture.

“I have to get into my budget figures. I don’t know what’s available. I know what I read in the media about the Limerick thing, and I’ll be getting my head around it, obviously.”

But is there a major-projects budget, and is there a procedure for spending it? “If there is €6 million sitting there, that was properly assigned. I know the point you’re making, and I don’t think there’s that fund set aside for that particular reason.”

You get the sense that Humphreys will hold her own at the Cabinet table and in all the inevitable meetings that will follow.

At school she was a good debater, and was on the team from St Aidan’s Comprehensive, in Cootehill, that beat Belvedere College, in Dublin, in a regional final. “That was with great pleasure, that day.”

Humphreys also describes with fondness acting in the school drama group, and she firmly believes that education is a way to break down the boundaries that limit access to the arts. For that reason she intends to follow up the memorandum of understanding between the departments of Arts and Education signed by Deenihan and the Department of Education.

She is also determined to set out the first national cultural policy. The preliminary meeting took place just before this interview, and Humphreys is developing a discussion paper as the next step.

But her “number-one priority” is working on the 1916 centenary, and in that light her appointment makes sense: a Border counties and Presbyterian voice balancing the clamour of republicans for ownership of the narrative. It has to be forward-looking, she says.

“The plan when it comes will go out for consultation, because it’s about engaging people with 2016. And it’s very important we involve the young people, and I have some ideas around that. We could have something around children and their proclamation for the future. Community is important. The big events will happen [anyway].

“My job is to commemorate what happened, but we have an opportunity through the arts. The arts will be involved.” They “have a hugely important role to play in the 2016 commemorations. The arts can push out the boundaries in ways that sometimes the spoken word can’t.”

Humphreys seems engaged and willing to learn. But how long can the arts world keep her before she’s promoted again?

Cultural roots: The Minister on . . .
Films and books “I liked Gone With the Wind [growing up]; it’s about a strong woman. And I like books by Philippa Gregory – The White Queen and The Other Boleyn Girl. They exercised a lot of power at court, and I love the idea of court. It’s all about influences, alliances, strategies. It doesn’t really change a lot, does it?”

The Bord Gáis Energy Theatre “There was a proposition from New Beginning, from Vincent P Martin and Ross Maguire, but the point is it’s an issue for Nama, and I don’t have any role in that. Nama have their own remit, and that falls under the Minister for Finance. I am looking at the proposal, because there are merits to it, but I don’t know if it’s going to work out at the end of the day, or if it’s viable.”

Seeing difficult work or work she doesn’t like “Don’t try to always make sense of something. Just enjoy it. You can’t like everything, so you can move on to the next one. But if I don’t like something you’ll see it on my face, because I can’t hide it.”