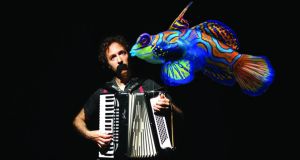 Pick of the week

Junction Festival
It might be easy to get a little festival fatigued at this time of year: don’t be. And if you are, you’re doing it wrong.

It’s not all standing in fields listening to bands you’ve heard once before (though that’s no bad thing) while dealing with sub-par facilities. And sometimes the big-name arts festivals can overwhelm punters with the variety of choice on offer.

As an alternative, there are any number of colourful festivals in smaller pockets of the country that are well worth making the trip for. Clonmel’s Junction Festival is a cracking example, and starts this weekend. (For other recommendations, see the Summer is Here festival guide).

Among the highlights at Clonmel are: Belonging(s), an interactive exhibition by Canadian artist Cathy Gordon with local practitioners; Vitamin; Donal O’Kelly’s Catalpa; Forever Young, which is on its way to the Edinburgh Fringe; and a selection of songs on the futility of war with the festival choir and RTÉ’s Contempo String Quartet. See junctionfestival.com for more.

One of the festival’s more subtle success stories has been its engagement with teenagers, not just in programming. Each year it signs up 25-30 people to a trainee programme who work with visiting artists and performers. Fancy getting a feel for a career in the arts? We can’t think of a better introduction. (And being a teenager, you are used to being broke, so you’re halfway there.)

The best bit at smaller festivals is often the atmosphere that comes with hanging around a country town filled with people enjoying themselves. Chats on the street with a glass in hand, and not a portaloo to be negotiated? Sounds like the perfect Irish summer to us.

Dominic Hawgood’s Under the Influence (Oonagh Young Gallery) tops the bill for this year’s PhotoIreland Festival. Christiane Peschek 13 Kinder and contemporary Australian photography in Island – Australia are both at the Copper House Gallery. Jigeum, which features emerging photographic artists from South Korea, is at the South Studios Gallery. Plus many other events throughout the month.

This is a two-day event across a rather beautiful natural setting and an indoor venue. Tonight features an outdoor cinema showing of The Goonies (8.30pm), while tomorrow, Set Theatre (8pm) features music from Jape, Slow Skies, I Have a Tribe, Sails, Elephant, Neon Wolf, and The Man Whom. Ticket holders have access to the event afterparty (from 11pm) at Set Theatre, Saturday, featuring a DJ set from Jape/Richie Egan.

It’s a long way down the road from the iconic Jockey Slut. The Bugged Out club grew out of that brilliant magazine. The club night and brand is still kicking and screaming 20 years on, with a rich history behind it. This visit to Belfast features London underground producers Waze & Odyssey, the duo behind that R Kelly remix, and Swedish new-school star Jonas Rathsman from Disclosure’s new Method White label.

A neat double-bill of attractions for fans of smart sounds. 2014’s Early Riser by Taylor McFerrin (above) on the Flying Lotus-led Brainfeeder label was full of sweet lines connecting soul, jazz, psych and electronica. From New York, Marcus Gilmore is a new-school drummer with impeccable credentials, having worked with Chick Corea, Ravi Coltrane, Gonzalo Rubacaba, Cassandra Wilson and many more. Cork soulman Deady provides the Irish flavour on the night.

Rusangano Family’s only summer Limerick show is part of the citywide Make a Move community arts festival this weekend. A coming together of rappers God Knows and MuRli with producer MynameisJohn, Rusangano Family are an exciting, explosive live force who are never backwards at coming forward. Support from Joni and Richie Kaboogie.

The movie quiz: Charlize, Arnie, Kurt, Helen – who hasn’t been in a Fast & Furious film?
9