The Co Mayo bash wasn’t exactly the wild west, but it was nice nonetheless 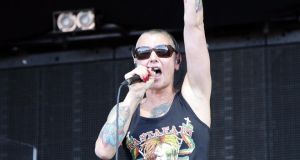 The high priest of Co Mayo 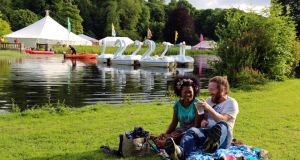 Far from the paddling crowd at Westport

Heading whesht to Mayo for the Westport Festival of Music and Food, I was a bit apprehensive. Not only had we been spoiled by the bash in Ballinlough, the line-up at Westport was as erratic as Hector Ó hEochagáin on a Skittles and red lemonade binge. Shane Filan (ex Westlife), Bryan Adams, The Bootleg Beatles and Björn Again occupied one end of the musical spectrum, with Tinariwen, Tony Joe White, Little Green Cars and We Cut Corners at the other.

Kool and The Gang were somewhere in the middle, providing some common ground for dancing, while Darina Allen steamed and simmered on the sidelines and David McSavage skulked through the shrubbery towards the comedy tent, avoiding evil glares from an Garda. Westport’s festival was never going to be a haven for hipsters or home to hordes of hardcore hippies, but that isn’t the market they’ve got a bead on.

Wayne from Co Offaly told me that he’s been to Electric Picnic and Body and Soul, but never felt comfortable at either. “I find them a bit pretentious.” Wayne works as a bouncer and the last thing he wants to see on his weekend off are drunken and drugged festival folk falling around the place. What Westport might lack in edgy experimentalists, it makes up for with throngs of really nice people who are out for good times in sedate and picturesque surroundings. Describing something as nice can often be damning, but surely not when it’s just so damn nice?

You couldn’t bring your own food or drink into the gig (unless you were willing to indulge in some light subterfuge) and in town Westporters complained that free passes for the pastoral party on their doorstep were in short supply.

It would be naive to think that festivals don’t need to generate income, but it detracts from the enjoyment of the thing if you acutely feel the raison d’être of the session is to empty your pockets. This blip on the enjoyment radar faded once you steeped yourself in the niceness.

SWAN PEDAL BOATS Many festivals could be considered child-friendly, but none of them is nailing it as well as Westport. The swan-shaped pedal boats that glide through the water in front of the stately manor had a healthy queue all weekend. Finding out there was no charge to take them for a paddle dealt a solid left hook to my fiscal cynicism.

The Róisín Dubh Stage dealt up some crackers to counteract the occasional lump of cheese at the main stage, but surprisingly it was David Gray who clocked in one of the best performances. Gray’s band made a powerful and beautiful sound (David Kitt relishing his role on backing vocals, guitar and electronics). Gray is back in the world again and back on stage at Daytripper in Waterford this Saturday and Groove in Wicklow on Sunday, and I’m told his gig is outselling both Paloma Faith and The Kaiser Chiefs in the Déise.

Sinéad O’Connor started her set with John Grant’s Queen of Denmark and finished it out as a High Priestess of Mayo. Sinéad Mhaol wooed Westport. “Forgive me, I’m weird,” she said during some clunky pre-song banter; after she finished an a capella version of In This Heart, we’d have forgiven her anything.

Kool & The Gang’s celebratory vibe captured the spirit of the weekend and it was worth suffering Cherish The Love to get to the funk. It was the first festival I’ve been at where jazz hands were actively encouraged; I’m going whip them out again at And So I Watch You From Afar at Light Colour Sound in Kilkenny on Saturday, as an alternative to the devil-horned rock fist. I’m not expecting anyone to wave back.