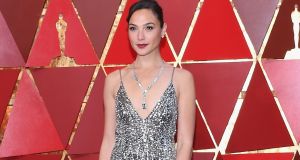 Gal Gadot, who played Wonder Woman and has now been cast as Cleopatra, attending the 90th Annual Academy Awards in Hollywood in 2018. Photogaph: Kevork Djansezian/Getty Images

What did Patty Jenkins think would happen when news emerged that she was to direct Gal Gadot as Cleopatra in a big-budget epic for Paramount? How did that studio expect the reports to land?

This is not 1963. When Elizabeth Taylor, a white Anglo-American from Hampstead Garden Suburb, played the role in that year there was barely a whisper of complaint (or not about her race, anyway). Few would have demanded a north African actor in 1983 or 1993. In the current century, however, a reasonable desire to move on from Wasp hegemony has caused studios to think more carefully when casting such characters. A breakout performance by Sofia Boutella, born and raised in Algeria, as the title character in the recent version of The Mummy proved the only reason to endure that terrible film.

Gal Gadot, best known for Jenkins’s Wonder Woman, is also from a nearby stretch of the Mediterranean, but the filmmakers will surely be aware of the distinction between casting an Algerian and an Israeli as an Egyptian character. The news that Gadot served two mandatory years in the Israeli Defence Forces does little to quell potential controversy. Did Jenkins really expect this to go off without a hitch?

At any rate, the news had barely landed before social media blew its collective top. Quaintly, more than a few correspondents — apparently unaware of how the film industry has functioned for the past few decades — wondered why we were getting yet “another Cleopatra film”. In fact, the last theatrically released studio feature focussing on the Egyptian monarch was that Liz Taylor project from 57 years ago. In earlier decades, Sophia Loren, Vivien Leigh and Claudette Colbert took on the role. If nothing else, we should celebrate Jenkins’s apparent dedication to the revival of an old-school Hollywood genre: the quasi-historical, sand-in-the-clapperboard epic.

Most of the objections were, however, about the ethnicity of the lead actor. You have to feel for one Twitter user who wondered why they cast Gadot rather than the Lebanese actor Nadine Njeim. Only one of these women was Wonder Woman. Star power isn’t what it was, but a name still generates a certain amount of capital.

The wider analysis of the controversy confirmed just how tricky it can be to observe racially responsible casting. If you didn’t know Cleopatra was of Macedonian-Greek descent on Monday then, by Osiris, you knew it by Friday. Kathryn Bard, professor of archaeology and classical studies at Boston University, was much in demand from our friends Doctor Cut and Professor Paste. “Cleopatra VII was white — of Macedonian descent, as were all of the Ptolemy rulers, who lived in Egypt,” she told Newsweek.

The queen was indeed descended, on her father’s side, from the Ptolemaic dynasty that emerged from Macedonia in the third century BC (I knew all this beforehand, obviously). But Betsy M Bryan, professor of Egyptian art and archaeology at Johns Hopkins University, is here to remind us that we can’t be certain who were mum was: “The mother of Cleopatra has been suggested to have been from the family of the priests of Memphis. If this were the case, then Cleopatra could have been at least 50 per cent Egyptian in origin.”

All right. So we’re looking for an actor who is definitely Greek and may also be Egyptian. Only a few performers in Spotlight theatrical directory fit that category. Why not just settle for a Middle Eastern actor? Well, because nobody is quite sure what that means. Some of the less lovely online chatter this week focused on Gadot’s Ashkenazi background and her family’s decision to change its name from a central-European version (you can imagine where that line led).

There will be no wholly satisfactory solution to the problem — if you see it as a problem — until some boffin generates an actor from Cleopatra’s miraculously recovered DNA. Even then, the wiseacres who pointed out that Cleopatra was famously much less pulchritudinous than Claudette Colbert or Elizabeth Taylor will be complaining that her nose is too straight or her hips are too thin.

None of which is to imply that the industry’s move towards more racially sensitive casting is not a good thing. It is essential. The habit of casting actors such as the Mexican Anthony Quinn (Greek in Zorba the Greek) or the Russian Yul Brynner (Thai in the King and I) as all-purpose “foreigners” will not be much missed. Mainstream tolerance for “blacking-up” was correctly buried by the turn of the century. Meanwhile, the creative, racially diverse casting in films such as The Personal History of David Copperfield opens period drama up to actors from all backgrounds.

The current, intense efforts to pin a first-century BC monarch to a contemporary colour wheel do, however, feel like an unnecessary distraction. Gal Gadot, who is said to have originated the project, must wish she had instead decided on a project about the making of the 1963 movie.

I’d watch that — even if they didn’t cast a Welshman as Richard Burton.