TV review: This deeply dreary series comes to RTÉ two years after its US debut 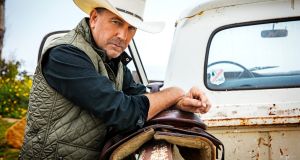 If there’s a giveaway that a drama is aiming for rarefied “prestige TV” status it is the appearance early on of a dead animal. In the first episode of House of Cards Kevin Spacey’s Frank Underwood announced his villainy by - crunch - snapping a cute pooch’s neck. He’d spent the previous 60 minutes lying and conniving. But here was the official confirmation of his membership of the bad-egg club.

There’s a similar scene in the opening minutes of bloated and underwhelming familial saga Yellowstone (RTÉ 2, Tuesday), in which weather-beaten rancher John Dutton (Kevin Costner) puts a bullet through the neck of a stricken horse. The message is as loud as the shot that rings out in the Montana air. A man who can annihilate a nag can do a lot of bad things.

Costner is reportedly on $500,000 per episode of this deeply dreary series that comes to RTÉ two years after its US debut. In the feature length-premiere, he earns his pay cheque by scowling so ardently there seems a serious danger he might burn a hole in the screen.

Dutton is the owner of America’s largest contagious cattle farm, which adjoins the country’s first natural park of Yellowstone. He’s ludicrously wealthy, with militarised security and a fleet of private helicopters.

Still, life has its challenges. Dutton’s family situation, in particular, is a bit of a mess. His wife is long-passed, leaving his four grown-up kids to variously squabble among themselves and feud with their dad.

And then there are the power-players itching to get a paw on his land. The rogue’s gallery include an evil property tycoon portrayed by Danny Huston and a Native American casino magnate (Gil Birmingham). All of this weighs heavily on Dutton. Or at least it does on Costner, who comes across as even grumpier than he was bobbing around in straw underwear in Waterworld 30 years ago.

He is, however, just one sour-puss among many. Likewise frowning her way through the 90 minutes is Kelly Reilly, who plays Dutton’s highflying businesswoman daughter as a daddy’s girl with parental issues she is eager to take out on the world.

His three sons are underwritten and indistinguishable by comparison. This becomes an issue as one of them is killed in a complicated stand-off with Native Americans halfway through the episode.

Yellowstone was written by Taylor Sheridan, who, in movies such as Sicario and Hell or High Water, proved adept at locating the moral vacuum at the heart of the American dream. Alas, his storytelling instincts have evaporated somewhere over the parched Montana prairie.

Yellowstone is more interested in exploring the craggy details of Costner’s harrumphing profile than getting under his character’s skin. It’s style over substance and when most of that style consists of Kevin Costner looking as if he’s just stepped on something sharp, then you’re in trouble.

Battle of Cable Street: when the Irish helped beat back the fascists
8