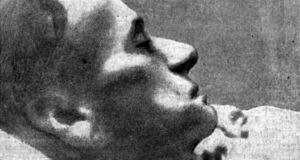 The emaciated face of Terence MacSwiney, in a photograph published by a French newspaper under the heading: ‘The Lord Mayor of Cork Two Days Before His Death’. Photograph: UCD Archives

The challenge facing RTÉ during the centenary of the War of Independence is to produce programming that marks the anniversary while speaking to a contemporary audience. Dry, academic regurgitation will do nobody any favours. We know the facts, more or less. What about the context, the aftermath, the stories previously untold?

So it is to the credit of social historian Sarah-Anne Buckley that she pushes past history documentary cliché in 74 Days: The Hunger Strike of Terence MacSwiney (RTÉ One, 9.35pm).

Her chronicling of the hunger strike and death of the Lord Mayor of Cork in October 1920 doesn’t always work. But Buckley and director Ciara Hyland are to be commended for trying something different rather than relying on the same old talking heads.

Buckley, a lecturer at NUIG, comes at MacSwiney’s struggle from two angles. She explores the central role during the hunger strike at Brixton Prison of the women in MacSwiney’s life. These were his wife Muriel and his sisters Mary and Annie. This was as much their tragedy and triumph as his, as they supported him through the darkest days of his protest against British rule.

Less successful is an analysis of his physical deterioration in those final weeks. A GP and a clinical psychologist are wheeled on to comment on what MacSwiney would have gone through during his 74 days without food.

The whiff of gimmickry hangs heavy. Do we really need to know about MacSwiney’s potassium levels as the end loomed? We are also treated to such crashingly banal statements as, “Hunger pangs are not going to stop Terence MacSwiney now”. Well yes, we could have guessed that going in.

But this doesn’t meaningfully detract from an otherwise sharp-eyed and brisk film. Helene O’Keeffe and John Borgonovo are among the historians who frame MacSwiney’s life and death in the context of the independence struggle. And an evocative picture is painted of Cork as the epicentre of the struggle against UK rule.

One surprise, given British ignorance of Ireland today, is how big a story MacSwiney was in the UK at the time. His hunger strike and death also created headlines globally. And Buckley signs off with a haunting coda as she quotes MacSwiney’s own words: “It is not those who can inflict the most, but those who can suffer the most who will conquer.”