Twisty history: RTÉ is covering Election 1918 ‘as it happens’ 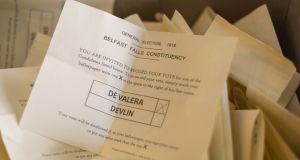 A vote for a young maths teacher Eamon De Valera

“Five seconds, four, three, two, one.” We’re on the deck, the control room for the TV studio below, with a wall of screens showing camera views: a panel of guests, a presenter, screens of graphics.

“You’re very welcome back to Election 1918,” says David McCullagh in studio,, “where we’re delving deep into the most important and momentous election in Ireland’s history. At the moment it’s looking like a rising Sinn Féin tide is going to give a mandate for a separatist republican parliament in Dublin. But in the north it looks as if the unionists are showing strongly, and we could be looking at the prospect of a major division on the island...”

No, you won’t have misunderstood, when you switch over from Corrie on Friday night, and find RTÉ 1 in the midst of dramatic election coverage. A century after 1918’s 32-county general election, RTÉ is broadcasting an election special, hosted by McCullagh, with Sinéad O’Carroll analysing results across the constituencies.

There’ll be all the usual tools we are used to in election coverage – panels of political analysts, live count centre reports, candidates profiles. Only.... this election was 100 years ago, exactly.

What a great idea to bring history alive. So viewers can feel the tensions at play in Ireland in 1918, when an election gave birth to Irish democracy. Watching the recording, once disbelief is suspended, you’re swept along by the excitement of an election that shatters the dynamic.

“The starting premise was, this was the forgotten 24 hours that changed Ireland,” says Cormac Hargaden of independent production company Loose Horse. (Well, a bit longer, as postal votes from soldiers abroad dribbled in; but they’re taking dramatic licence and tightening timelags). “This is an undertold story in Irish history – the crucial vote that joined the Rising and and War of Independence.”

The idea was Hargaden’s: “I’m one of those sad nerds who watches election result programmes as if it was the Late Late Toy Show. I sit down with a bag of popcorn and enjoy the night.”

Having produced Trial of the Century a couple of years ago, imagining Padraig Pearse’s trial, “we have a charge sheet in this genre. We call it twisty history – a slightly different device to tell the story.”

He approached David McCullagh, and they talked to Colm O’Callaghan of specialist factual programming in RTÉ, who commissioned it, with help from the BAI Sound and Vision funding.

O’Callaghan grabbed the opportunity for something different. “It’s 90 minutes at 7pm, 10 days before Christmas. There’s plenty of meat in there, and public education too, but it’s the way it’s wrapped up”.

Hargaden: “It’s the first time that Edward Carson and Michael Collins have gone head to head with Emmerdale and Coronation Street.”

O’Callaghan: “It’s an alternative. We’re asking people to step outside reality.” Hargaden: “I’m a historian, get me outta here!”

In a dressing room beforehand, McCullagh jokes he had wanted a handlebar moustache (he hasn’t got one; those in studio are in modern, while the filmed inserts are in period).

With this election coverage we know the outcome. “Yeah, it’s bizarre,” says McCullagh, “but there are twists and turns at the time. So if there had been an election programme back then – you know the Home Rule party are going to get a shellacking, but you don’t know how bad it’s going to be. And we’ll address what happens next. The people have spoken, but what does it mean?”

They all mention contemporary echoes. McCullagh says “the parallels with now are stunning: the question of the Border on the island of Ireland; are we wise economically to leave the single market of the UK – do we leave or do we remain?”

Hargaden signals Ireland’s decision: “whether the emotional appeal of leaving and asserting our own independence outweighs the pragmatism of remaining within a union.”

Down in the studio, before recording starts, director Ruan Magan – who also created the period inserts – is talking to panellists, like a coach briefing the team who will be jumping into the past, to get them into the mindset.

UCC political scientist Theresa Reidy will analyse stats, and revolving panels of political scientists, journalists and historians – Harry McGee of this parish, social historian Emma Dabiri, Mark Duncan (Century Ireland), Anne Dolan (TCD), Diarmuid Ferriter (UCD), Gary Murphy (DCU) – will discuss the North, Labour’s decision not to run – “one theory is people get into a habit of voting,” says McCullagh, “and if the first time you vote the choice on offer... you are more likely to keep voting that way in future” – the implications of the Sinn Féin landslide, and of women voting.

Magan comes over and we look at the muted set, with curved cherrywood and a colour palette - teal, burnt orange, dark green - inspired by Mainie Jellet. As the programme gets going, and the experts get into the 1918 groove, interspersed by “live” count centre reports, an excitement builds for the novelty of watching an election that matters, where the results actually change reality.

Action switches from studio discussion and incoming results updating the map, to a “live, satellite” link to a reporter at the Cork count centre where a young relative unknown Michael Collins has just won a seat, or to Waterford where Redmond has been re-elected.

In a report from Lincoln prison, where many winning Sinn Féin candidates are in jail, we hear cheers behind the plummy journalist. Mini-mockumentary inserts explore who exactly is this young maths teacher Eamon De Valera who has sprung from nowhere, or Edward Carson, who moved from Dublin to Belfast to lead the unionists.

The electorate had doubled (including men without property and women over 30, and emigration had effectively stopped), so there was uncertainty about where the new votes would go. Even sensing a Sinn Féin landslide, says Hardagen, “there was this moment of doubt, like the night of Brexit or when Trump was elected, waiting to see is it going to materialise or will it be a surprise.

“We transplant it into real time and use the present tense to play on those chinks of uncertainty and excitement on the night.” Some people voted for the first time, and others who voted in 1918 would have lived through the famine. “It would have meant a lot to be able to vote for independence.”

“It really was the division of the island,” says McCullagh. “People talk about the first Dáil and the influence of violence, but actually the democratic imperative was much more important in the development of Irish independence in the long run, and this is the moment people had their say, north and south.

McCullagh says: “So, it’s a bit of fun, but hopefully people will engage with it and think of history a bit differently. The nifty trick is to try and transport the viewer back in time – to look at it through 1918 eyes, not today’s eyes, knowing what happens next.

RTÉ schedules have shifted on Friday, December 14th, to mark the 1918 election. The Election ‘18 results programme (RTÉ 1, 7pm) is the lynchpin. There will be a 1918 “what it says in the papers” on Morning Ireland, discussion on Today with Sean O’Rourke, and a weather bulletin from 1918.