The Young Offenders: The original fecking eejits are back

Review: The return of our soft-hearted, soft-headed Cork yobs is right on form 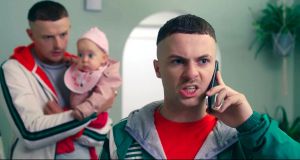 With the third series of The Young Offenders (Friday, BBC 1, 9.30pm; RTÉ 1, 9.35pm), the return of Conor and Jock (Chris Walley and Alex Murphy), our favourite Cork yobs with soft hearts and softer heads, is right on form. Thankfully they’ve been expelled from school according to the advance info, as the “teens” have hit a physical maturity that slightly stretches credulity. Still, suspend disbelief; it’s worth the crack.

Their latest antics require a degree of planning for the opening episode’s plot: executing a heist while minding a baby. What could go wrong? Remember the Hollywood comedy Three Men and a Baby? Forget it now. This has a baby cutie too, but it’s the version with foul-mouthed, pudding-basin haired, dozy juvenile delinquents with an off-kilter but moral compass, poorly executing a crime.

Siobhan (Jennifer Barry) and Jock’s baby Star is now eight months old, and despite the misgivings of Siobhan’s father, school principal Barry Walsh (PJ Gallagher), Jock and Conor are allowed to mind her for a day. His lack of trust stems from a “near-drop incident”, seen in a flashback of impressive stuntwork and baby-throwing activity. It sets the tone for how the boys will handle grown-up responsibility in their now unusually-structured extended family. That is, by the amusing skin of their teeth, with added Cork profanity.

The original fecking eejits are still doing a great line in dozy nods, but find themselves the strategists of Billy Murphy’s (Shane Casey) plan to knock off a lorryload of TVs. “Seeing as Jock and me were the brains of the operation, it was time for our brains to start operating,” says Conor.

Naturally, their slipshod planning is stymied by struggling to collapse a buggy, changing a nappy on a bonnet (of a car, not the headgear), sterilising a bottle mid-heist, and, of course, losing the baby. As Billy complains, “It’s not a proper heist if one of the gang members is a baby.”

“Don’t be a snitch, don’t tell Mammy”, Jock whispers to his smiling eight-month-old as the “plan” limps along.

The sideplots continue apace in Peter Foott’s script, a pleasing mix of fierce coarseness and warmth. The romance of Linda (Demi Isaac Oviawe) and Conor has moved along with wince-inducing urgency since they “broke each other’s virginity”. Feisty Mairead (Hilary Rose) and Sergeant Healy’s (Dominic MacHale) courtship is currently mainly phone and expletive-based.

An amusing mix of daft plotting, hearts-on-sleeves and a delicious sense of the ridiculous.