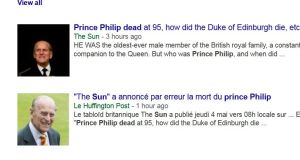 “Prince Philip dead at 95, how did the Duke of Edinburgh die, etc etc”. Anyone even slightly familiar with the news publishing process would have seen immediately what was wrong with that headline. It’s the sort of work-in-progress that reporters and sub-editors throw onto the screen as they assemble the various elements of a potential breaking news story in advance of that story being officially confirmed.

Almost certainly, therefore, the Sun’s erroneous online report of the Duke’s demise this morning was the result of a technical or production error, rather than a conscious editorial decision to publish. In that sense, it differs from a mistake such as Channel 4 News’ recent misidentification of the Westminster terror attacker live on air during its evening bulletin.

But the end result is just as embarrassing. The Sun deleted the article within minutes of publication, but it continues to appear in searches on Google, along with its opening lines: “He was the oldest-ever male member of the British royal family, a constant companion to the Queen. But who was Prince Philip?”

We can expect to see more of this kind of thing in the years ahead, whether because of technical errors or editorial misjudgments. In ancient pre-internet times, print and broadcast production schedules allowed some space and time for reflection and reconsideration. Not anymore. A delay of a few seconds can have a measurable effect on traffic. The pressure to be first in the digital news environment is intense. Coming first means achieving higher rankings on search engines and being shared more on Facebook. In newsrooms; fingers hover over keyboards, waiting to hit the “publish” button as quickly as possible. Meanwhile, the pressure to publish intensifies as speculative rumours surge across Twitter, amplified by websites which are unconstrained by any editorial or ethical codes.

The potential for error increases as traditional layers of editorial gatekeeping are reduced or even removed. Newsrooms have been cutting back on production, copy-proofing and sub-editing staff for years in response to falling revenues, and the process hasn’t stopped. The New York Times announced big rises in digital subscribers and advertising this week, but it continues to cut production personnel. A logical consequence of this is that, despite best intentions, more errors will slip through.

Does it have to be this way? Not necessarily, or at least not completely. High-speed publishing systems that upload content instantaneously to the internet will inevitably lead to more errors. But if news media wish to retain whatever confidence their audiences still have in them, they would be well advised to put clear systems in place for owning up to those mistakes, rather than trying to hide them and pretend they never happened (which, in the era of Google, is pretty much impossible anyway).

Also, many news organisations are realising that chasing after clicks and shares is a mug’s game, which does more for the business models of Google and Facebook than their own. A better model, they increasingly believe, is to focus on loyal readers and viewers rather than once-off visitors. And those loyal readers will place more value on being right than on being first.

Actress by Anne Enright: a writer performing at the peak of her powers
9