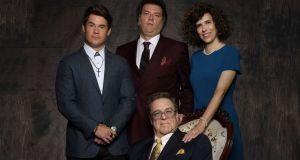 The Righteous Gemstones: zany and crackles with baroque energy

The Righteous Gemstones (Sky Comedy, Wednesday 9pm) does not sparkle immediately. This tale of a megabucks televangelist and his corrupt family seems at first to swing at easy targets. Religion is for suckers, the American Bible Belt brims with rednecks, those who claim to know the truth invariably peddle lies. You’ve heard this one before.

John Goodman plays Dr Eli Gemstone precisely as you would expect: as a hurricane-force bully whose thuggishness bubbles just beneath the surface. The conceit is that the face he presents to the world is very different from the one he wears in private. But he is never depicted as anything other than low-key menacing, even when supposedly seducing his flock with his silver tongue.

His family are no less loathsome and it is not immediately clear why we should take the time to invest in any of them. Danny McBride, who created the project for HBO, is debased eldest child Jesse. Adam DeVine plays his dunderheaded little brother Kelvin with Edi Patterson as their needy sister, Judy. Imagine the knives-out internecine rivalries of Succession (also HBO), minus the live-wire banter.

Yet the Righteous Gemstones is slowly revealed to have a crooked charm. A blackmailing subplot involving Jesse descends into a baroque lark that borrows shamelessly from the noir end of the Coen Brothers. And episode one concludes in a shooting as ghastly as it is hilarious. Finally there is a glimmering of something deeper and bleaker than lazy satire.

The series is a centre-piece of Sky’s new Sky Comedy channel. The service is a bit of a clearing house for imported chuckles, with the schedules dominated by American comedy and by American alleged comedy.

So we are treated to repeats of 30 Rock and Parks and Recreation, delayed airings of the terminally terrible Saturday Night Live and week night screenings of Most Annoying Person Alive Jimmy Fallon and his “talk” show. You could watch that. Or you could stay up late sticking cocktail sticks in your eyes. I know which I’d – ouch – rather do.

Still, there are a few highlights. A new season of Larry David’s Curb Your Enthusiasm (Tuesdays, 9pm), for instance, grasps the live rail of the #MeToo movement and somehow manages to not become a human torch in the process.

Stay with it and the Righteous Gemstones, meanwhile, starts to grow on you. The humour is darker than pitch-black creosote, the characters uniformly ghastly. However, it is zany and crackles with a baroque energy. It’s no Succession and Dr Eli is nowhere near as multifaceted a monster as that show’s Logan Roy. But as early spring stop-gap it will more than suffice.