Review: Her work is perfect for TV. This drama, though flawed, manages not to muck it up 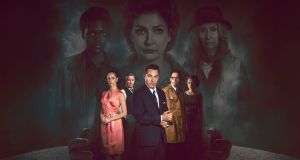 Sarah Phelps’ latest Agatha Christie adaptation (BBC One, Sunday, 9pm) has something for everyone. Suspicious deaths, a coven of witches (headed by a dead ringer for Kate Bush circa Cloudbusting) and a mummers walk straight out of the Wicker Man. That’s half the bingo card ticked, and we’re only midway through the first of two episodes.

But it loses its footing at moments too. Rufus Sewell’s philandering anti-hero Mark Easterbrook is a notch down from Phelps’s 2018 take on Christie’s ABC Murders and its loathsome Mr Cust. And while Sean Pertwee gives it the full gruff geezer as Detective Inspector Lejeune he’s no Hercule Poirot (reimagined so grippingly as a priest with PTSD by John Malkovich in that same series).

Still, it is deliciously atmospheric. And with the bodies piling up at a steady clip you can’t accuse it of not doing what it says on the tin. How ingenious , moreover, of Phelps to flesh out the supernatural aspects of Christie’s 1961 novel and to nudge the story towards an older English gothic tradition. We are closer to MR James than Miss Marple.

This is most evident when Easterbrook, convinced he has been cursed by the power trio of crones, visits the Hammer Horror hamlet of Much Deeping. As he wanders the empty byways and spies a pub named the Pale Horse (the Biblical avatar of death), a chill descends. A deserted English village on a bright, windless day is creepy in a very specific way and Phelps drills into that.

It’s just as well the ambience is irresistible and that the 1960s setting is so richly evoked (what dinky cars they all drove). Elsewhere the Pale Horse is a bit of a muddle. Easterbrook has had a rum old time of it, with his first wife (Georgina Campbell) suffering a fatal electrocution in the bath. Twelve months after the funeral he has remarried.

Alas, his new love affair can’t be all that grand as he is also carrying on with a West End dancer with a society background (Poppy Gilbert). She turns up dead, with an expired rat in her kitchen and Easterbrook in bed beside her. When he does a runner the game is suddenly under way

Sewell does his best, though the character’s default setting is a sort of arch befuddlement. His bemusement intensifies following a run-in with shop-keeper Zachariah Osborne (Bertie Carvel). This bug-eyed weirdo is convinced they are both victims of a hellish hex, as are those who have already perished.

Duff dialogue doesn’t help. An exchange between Easterbrook’s young bride Hermia (Kaya Scodelario) and a waspish society girl has all the crackle of a Neighbours script. And also, when you say “Hermia” quickly, as most of the cast do, it sounds like “Hernia”. Couldn’t Phelps have chosen something, anything, else?

Phelps misstepped with her adaptation last year of Tana French’s Dublin Murders novels. She leaned too deeply into the shaggy metaphysics of the source material with results that felt like they might have been set anywhere in the world other than Dublin. She’s on surer territory here. The Pale Horse has its flaws.

But Christie’s tightly-cranked plots are perfect for television and this latest retelling just about manages not to muck up the golden formula.