RTÉ unveils €1.4 million revamp of news on the Six One and 9 o’clock bulletins 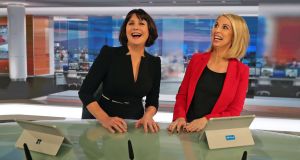 The news agenda continues relentlessly, but this evening’s RTÉ news broadcasts will look different, thanks to a €1.4million revamp of the national broadcaster’s most used studio.

Viewers will get a more contemporary, visually interesting experience of news and special broadcasts.

At a press preview today, deputy director of RTÉ news and current affairs Hilary McGouran and executive producer John O’Regan showed off the new look, which has taken several weeks to install and has been nearly a year in the planning.

RTÉ’s Studio 3 is the most used TV studio in Ireland, broadcasting more than 1,700 news bulletins and programmes each year – three daily news programmes, as well as shows such as The Week in Politics, news2day for young people, Leaders’ Questions and a range of special coverage such as elections, budgets, one-offs such as the Pope’s visit, commemorations and the coverage of last year’s extreme weather.

Speaking in the new studio today, news presenter Keelin Shanley joked that “we are almost crossing our fingers for snow for three days this week” to show off the capabilities of the new studio.

In its initial unlit state, with just a black backdrop wall, the studio looked unprepossessing. But when they turned on the lights and drop in the slick video projections, it is a space transformed.

The background graphics have a wow factor: with a wraparound of an enormous, modern newsroom (a visual trick, sadly, and not RTÉ’s actual more mundane newsroom) and a Dublin skyline that switches between daytime, dusk and night depending on the time of broadcast.

The new videowall doesn’t need space behind it, so it has moved farther back, allowing for more useable studio space, and more positions for presenters or guests – at desk, standing, or in a “soft space” couch area, where seating can be varied.

When a slick, silent new camera on a high rail panned across the studio, it made the space seem vast.

And while the the talk was all nightwalls and PIPs (pictures-in-pictures), they stressed the studio revamp will be judged not on its technological cabability but by how it looks and sounds to viewers. The aim, McGouran said, is to “help our storytelling and showcase our great journalism”.

The opening titles and music have also been refreshed: composer Ronan Hardiman has reworked RTÉ news theme music – it still incorporates O’Donnell Abu – which has been re-recorded by the RTÉ National Symphony Orchestra.

Among the most watched programmes in Ireland, RTÉ’s news programmes are important to the RTÉ 1 channel and brand. While local TV audiences generally have been on a downward trajectory, as channel choices increase and other media compete, McGouran said 570,000 people watched the 9 o’clock news last night, representing 40 per cent of people in Ireland watching TV at the time. Some 870,000 people watched RTE’s coverage on the first day of heavy snow last year.

The €1.4m capital spend on the new studio represents a small part of the proceeds from RTÉ’s land sale in 2017. It sold just under nine acres at its Donnybrook campus in Dublin to Cairn Homes for €107.5m. The investment comes 10 years after Studio 3 was last refurbished.

Presenters Keelin Shanley and Caitriona Perry were in studio today, looking forward to being the first to broadcast from the new Studio 3 for the 6pm news, and relishing the technology showcasing that news.

Said Perry: “The heavy lifting has been done: the design and planning and construction. We’re doing the test drive this evening and I hope we don’t crash it.”