‘I knew Marian was the presenter I wanted, and was lucky enough to secure her’ 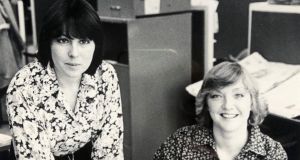 I first met Marian Finucane in the late 1970s, when I was a very young radio producer with RTÉ. Marian was a hungry young radio reporter who had given up a promising career as an architect to pursue a career in broadcasting. It was a time of great social change, with women demanding equality in the eyes of the law, work and equal pay, family rights and inheritance, and so on. We were colleagues in the Radio Centre, but it was only when Gemma Hussey challenged RTÉ to establish a programme dealing with women’s issues that we became team mates, and then lifelong friends.

I proposed a live, listener-driven programme dealing with the widest possible range of women’s issues – the concept which became Women Today. I was appointed as its first series producer.

I knew from the off that Marian was the presenter I wanted, and was lucky enough to be able to secure her. It was a great team of bright young producers, reporters and researchers, but it was Marian who shone, from the very first programme. She was only 29 – remarkably young to be fronting a daily live radio programme. But she took to the air as if she had been born to it.

Women Today was a programme that arrived at the perfect time. Irish women were fed up with the inequalities and injustices that they had endured for decades, centuries even. They wanted change, and they were no longer prepared to sit back and wait for males to deliver that change. Women Today opened up conversations about so many areas of injustice in Irish life, and, remarkably, it gave Irish women a voice that had not been heard before.

Listeners responded to Women Today, and to Marian, with ferocious support from some quarters and fierce criticism from others

The mainstream news agenda claimed to be covering women’s issues, but really they were often regarded as a footnote. Women Today blazed a trail with daily coverage of topics like the treatment of ‘unmarried mothers’ (as they were then referred to), domestic violence and the huge difficulty women had in getting the police and the judicial system to take action to protect them, the silence around rape and how women who reported rape were treated, women’s lack of financial independence in marriage, rural loneliness, the silence around women’s sexual problems, being a gay woman in Ireland . . . there was never a day or a week when we didn’t struggle with what to drop because we couldn’t fit everything in.

From the start, listeners responded to Women Today, and to Marian, with huge listenership figures, ferocious support from some quarters and fierce criticism from others.

Our wonderful head of features and current affairs Michael Littleton acted as our heat shield, protecting us and deflecting the worst of the attacks that flooded the upper echelons of RTÉ as we ventilated issues and stories that many would have preferred were left untold. But Marian bore the brunt of the criticism, on one memorable occasion being described in an opinion piece of a national newspaper as “the flea in the marriage bed of Ireland”.

This was after a programme dealing with how hard it was for married women to get information and advice on sexual dysfunction within their marriages – not even single women . . . this was the 1970s, don’t forget!

She was well able to withstand the criticism, although she did worry about how her mother, a traditional devout Catholic, might react not just to this priestly dressing-down, but to the way in which the programme was stirring up public discourse and the agenda of Irish public life.

Marian was the voice of the programme, but she was also the relentless driver of our coverage, always willing to stop us in our tracks and ask “Why are we covering this?”, to urge that we ditch our plans and follow a breaking story or a better idea. She was bright as a tack, empathetic, and fearless – the perfect mix for a programme which was driven by listeners’ experiences, their stories, in their words. Her huge curiosity and absence of ego meant that she was quite happy to allow her interviewees to shine. I can remember occasions where she asked only three or four questions over the course of a 10- to 15-minute interview, just enough to gently prod or guide her subject into telling their story.

Marian was an immensely private person, who hated having to do publicity, and who did all she could to keep her private life private. She was one of the least starry media people I ever met and has been often said, she kept her politics to herself. Her career moved on from the focused women’s agenda of Women Today, but she was a proud feminist who always saw, and understood the female angle, and was quick to pick up on any prejudice or bias, even unconscious, against women.

I moved on to television in 1980, and Women Today eventually morphed into Liveline, using the live listener phone-in originally premiered on Women Today as its core. Marian and I worked together again in 1984 and 1985 when she presented (and I series produced) The Women’s Programme, a weekly TV programme which continued to delve into the area of women’s rights and inequalities. It was another success for her, and co-presenter Doireann Ní Bhriain. It was here, too, that she first worked with Nuala O’Faolain, then a television producer, the start of a memorable lifelong friendship. With us too was Nell McCafferty, when we transferred her weekly Women Today audio column to television, and her sign-off “Goodnight, sisters” entered the popular lexicon.

After The Women’s Programme, we went our separate ways professionally, but not personally. Marian had a wonderful ability to make friends of her team colleagues, and the warmth of the hospitality which she and her husband John Clarke provided at their home outside Mullingar is something that all of us who worked with her in the 1970s and 1980s will always remember.

Our friendship endured over the years, even withstanding my 2009 return to RTÉ radio as managing director, and as her boss. We never let the inevitable tensions of that particular professional relationship sully our friendship. Our last exchange was in mid-December, when she, Doireann and I were arranging our annual much-loved get-together over a long lunch.

I’m so very sad that that lunch will now never happen.

Clare Duignan is a former managing director of RTÉ Radio and a non-executive director of The Irish Times.