30 years ago, paintings worth $1bn were stolen in Boston. A Dublin criminal says they’re here 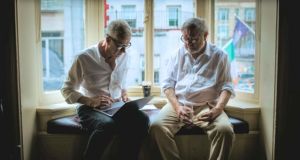 Art heists and Dublin gangland criminals have an entwined history going back to Martin “the General” Cahill’s smash-and-grab raid on the Beit Collection at Russborough House in 1986. But the Beit break-in – the copy-cat of a previous IRA robbery at Russborough – pales compared with the March 1990 theft from Boston’s Isabella Stewart Gardner Museum of $1 billion worth of paintings, including a Rembrandt and a Vermeer.

The whereabouts of these priceless works has been a mystery for 30 years. The extraordinary theory investigated in The Billion Dollar Art Hunt (BBC Four, 9pm) is that they are stashed behind the wall of a nondescript house in west Dublin.

This sounds incredible. And – spoiler alert – by the end of the hour-long documentary the claim has not been verified by journalist John Wilson (a sometime presenter of Front Row and son of one-time Arsenal goalkeeper Bob).

Yet it isn’t for want of huffing, puffing and driving around Dublin as Wilson and art detective Charley Hill explore assertions by gangland figure Martin Foley, aka the Viper, that he knows of the whereabouts of the art.

With no contraband canvasses uncovered, it’s ultimately a frustrating watch – though the mystery is a ripe one and Wilson breathless company through the 60 minutes.

Foley never appears on screen (we hear him talk on the phone to Hill). Nor is firm evidence produced that he knows of the whereabouts of the Isabella Stewart Gardner collection.

Wilson follows Hill around Dublin, growing increasingly frustrated at all the dead ends. He also spends time in Boston, where the consensus among FBI investigators is that the art never left the US and is probably gathering dust somewhere in New England. How, they ask, could anyone possibly smuggle a billion dollars worth of priceless paintings overseas?

Aha, replies Wilson. He reckons he has an answer: in 1984 Irish-American criminals shipped weapons from Boston to Ireland on fishing boat the Valhalla. Why not try the same with art?

There are further twists. Back in Dublin, Wilson consults an ex-head of the Garda Murder Squad, Gerry O’Carroll, and James Hamilton, a former director of public prosecutions.

US authorities are offering a $10 million reward and immunity for prosecution for anyone returning the art. Hill’s fear is that if they help criminals in Dublin claim the loot, they may be liable for prosecution under Irish law as accessory to a crime.

Hamilton does little to quell this misgivings. Still, the likelihood of anyone involved coming into contact with stolen goods diminishes as news that a BBC documentary crew is trying to contact the Viper is splashed across the tabloids.

The trail grows cold. Wilson, however, refuses to give up. The Billion Dollar Art Hunt concludes with him and Hill tracking down to Waterford a criminal who claims to know the true story of what happened. Interviewed with back to camera and voice replaced with an actor’s, the source predicts that, when the documentary goes out, the truth as to the whereabouts of the paintings will emerge.

Wilson is frustrated. “Is there a point where you have to let it go?” he asks Hill. The other man shakes his head and looks into the distance. “No…” he says. “No.”