The Big Flower Fight: Who knew arranging plants could be so elbows-out aggressive?

TV review: Vic Reeves plays host as 10 teams compete in a ruthless battle of the butterflies 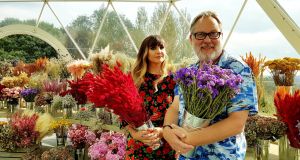 On the very day our garden centres open up again, Netflix unleashes The Big Flower Fight, an example of serendipity if ever there were one. Granted, most of those queuing around Ireland on Monday morning are probably just looking for industrial-strength weedkiller rather than enough plants to build, say, a five-metre-tall monarch butterfly. But if they tune into the first episode of the series, they may well be inspired to be more horticulturally ambitious.

Ten pairs of people who know their Coreopsis giganteas from their Echinacea Purpureas gather in the English countryside to be set a string of flowery-installation-building tasks, the first of which is to create an enormous insect.

Our hosts, Vic Reeves and Natasia Demetriou, introduce us to their regular judge, Kristen Griffith-VanderYacht, who, they tell us, is “florist to the stars”. So there’s never any chance he’d have been called Colin Smith or something.

Griffith-VanderYacht is assisted by today’s guest judge, the horticultural designer Humaira Ikram, who’s a bit like Prue Leith on The Great British Bake Off. And there are indeed similarities between the two series, not least the moment when it is revealed that Declan and Eoghan, Steph and Monet, and Delilah and Rachel have all chosen the butterfly task. The resulting competitive tension between the pairs is much as you’d find on Bake Off when two or more contestants choose to bake, say, Victoria sponges.

And although all the competitors initially come over as superpolite – Ryan opts to say “sugar honey ice tea” at one point, instead of “shit” – we soon see their dark side. When they are invited to choose material for their frames from a mountain of scrap, the ruthlessly, elbows-out aggressive, such as Henck and Yan, get what they want, but the more courteous Ralph and Jim are left, literally, with scraps. “The shape that we found, we can make a nice snail out of it,” says Ralph, holding up what looks to be half a rusting bicycle wheel.

Henck is especially cold-blooded: when Sarah asks him for some of his coconut husk, to make legs for the beetle she is creating with Jordan, Henck looks at her is if she has asked for his liver. Jordan tries to cheer Sarah up by telling her they’ll just build “a stationary beetle”.

In the end, the battle of the butterflies is won by Ireland’s own Declan and Eoghan, who have used a welder to fiddle with their frame so it looks as if it is in midflight. The other two butterflies look as if they would only ever fly courtesy of a 747, Ikram finding added fault with Delilah and Rachel’s creation because it’s too orange. “The coreopsis is really shouting out at me,” she complains. And which of us hasn’t been irked by a coreopsis really shouting at us?

But it is Steph and Monet who are the first to be eliminated, Monet having already sensed they’re in trouble when decision time looms. “I’m absolutely pooing myself,” she says – or ‘sugar-honey-ice-teaing’ myself, as Ryan would have put it.

Ralph and Jim’s snail survives, then, despite actually looking like a compost heap, and the best-in-Bloom award goes to Henck and Yan, for their moth. “These coconut-husk legs are blowing my mind,” Griffith-VanderYacht gushes, “and this is the most preposterous proboscis I have ever seen.” Henck and Yan hug in delight, so we take it that preposterous probosces are a good thing. Just don’t ask your garden-centre people how to build them. They’ll probably call security.