Television: A story to chill the soul and a couple to warm the heart 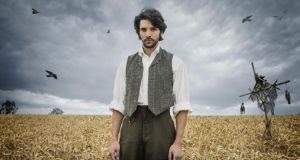 The new go-to guy when Aidan “Poldark” Turner is too busy?: Colin Morgan in The Living and the Dead

A visit to the eye-opening Undressed exhibition at the V&A in London earlier this month, which shows underwear through the centuries, has given me a whole new way of looking at Victorian women and the vogue at the time for the supernatural.

Fashion dictated that they wore restrictive corsets made of whalebones – torture garments, really – which gave them tiny waists, crushed their ribs and left them unable to breathe properly. They must have been near faint a lot of the time, living in a twilight daze, so it’s little wonder they were given to seeing apparitions and ghostly goings-on.

The Living and the Dead (BBC Two, Tuesday), a six-part drama set in bucolic Somerset in 1894, brilliantly captures this fascination with the supernatural, a febrile sense of hysteria and the early days of psychology. Ashley Pharoah, who also wrote Life on Mars and Ashes to Ashes, sums up his atmospheric drama as “Sigmund Freud meets Thomas Hardy with ghosts”.

A pioneering young psychologist, Nathan Appleby (Colin Morgan), returns from London to his family estate on the death of his mother. The farm, stuck in a premechanisation era, is struggling. Vowing to turn it around, he and his vivacious, forward-thinking wife, Charlotte (Charlotte Spencer), set to work modernising.

And how gorgeous are they? Fresh from playing a cyborg in one of my favourite series last year, Humans, on Channel 4, Morgan looks so good in this era that I suspect he’ll become the go-to guy when Aidan “Poldark” Turner is too busy.

Then the local vicar seeks Appleby’s help. His teenage daughter, Harriet, has been speaking in tongues and seeing ghosts, and Appleby’s initial diagnosis is that she is in that difficult stage between childhood and adulthood, with the implication that she will soon grow out of it. But hysteria transforms into something else, and she becomes dangerously strange. When she feeds a live duckling to a pig it’s the clearest sign possible that viewers aren’t to consider her a likeable character.

Sinister things start happening on the farm, and although it seems unlikely to Appleby, a man of science, there is a growing suspicion that they may be linked.

The first episode of the satisfyingly chilling The Living and the Dead sets the scene for the five to come. Beautifully filmed and directed by Alice Troughton, it’s a ghost story with depth, set against a rural society on the cusp of great change.

Not for the first time have I been sold a pup when it comes to a fly-on-the-wall series. TV3 is trumpeting Ready for Take-off (Wednesday), its eight-part observational series, as a look “behind the scenes of Qantas Airways . . . headed up by Dublin businessman Alan Joyce”. And even though I have been doing this job for far too long, and have an aversion to fly-on-the-wall programmes (except Channel 4’s 24 Hours in A&E), as they tend to basically be glossy ads for whatever business has allowed the cameras in, I still thought that, just maybe, Ready for Take-off might be made by TV3 and feature Joyce.

He’s a fortysomething gay Tallaght man who has reached the top of this huge airline, and I want to know more about him. Given the “unprecedented access”, there’d surely be one or two juicy or slightly terrifying stories of bad behaviour from passengers and of near misses in the air.

But no. Ready for Take-Off is an Australian-made love-in with the country’s national airline that TV, plucked, I suspect, from the bargain bin of international programme sales.

It’s wall to wall with smiley “customer experience managers”, heavily made-up women in jaunty side-knotted neck scarves, and the bloke who tows the aircraft into position, who says he loves his job so much he’d do it for nothing (while I reach for the sick bag).

Segments begin, “It’s 11am in Perth,” then tell training-video-type stories of how good the service is. We do see Joyce – for a few seconds, at a reception to see the Wallabies off to the Rugby World Cup last year. It all stinks to high heaven of publicity puffery.

I put off watching the season finale of Veep (Sky Atlantic, Monday) for as long as I can – a whole day – because I can’t bear for this fifth series of the searingly brilliant comedy to be over. So I rewatch several previous episodes, just to prolong Julia Louis-Dreyfus’s wincingly hilarious Selina Myers experience.

The Veep finale, called “Inauguration”, delivers one unexpected turn after another. Each of her White House team has their moment. Kent, the numbers geek, takes a poll that finds Selina to be “the 43rd least effective president ever, after James Buchanan . . . and many feel he was responsible for starting the Civil War”. Frantic as power slips away – “I hate this country” says Selina; “I know,” answers her press secretary, Mike – she’s consumed with her legacy. “I want my Nobel Prize,” she roars. Freeing Tibet seems the likeliest route, so she engages, fruitlessly, with her Chinese counterparts.

Veep may be dripping with cynicism, but in this US presidential-election year, its fifth series has felt like a behind-the-scenes primer on how Capitol Hill really works.

Her staff are planning their own futures. Dan the opportunist wants to “take the Dan Egan brand to the next level”, to which Amy replies: “Too bad Goebbels killed himself.”

And then Selina, her team and the audience are blindsided. Machiavellian vote management by her vice president – he wants to become secretary of state – changes the result we’ve been expecting. The odious Tom won’t be president. Another woman is getting the Oval Office – Laura Montez, with her phoney Mexican accent – and a heartbroken Selina, having grovelled before Tom for the vice-presidency, sees her political career come to a crashing end. Even though she’s monstrous, self-absorbed and magnificently obnoxious we end up feeling a tiny bit sorry for her, and not just because of her unusual moments of self-awareness.

In the end it’s just Selina and her ever-faithful lip-balm-toting, tea-making assistant, the adoring Gary, sitting in the rain while in the distance Hail to the Chief plays at the new president’s inauguration. An unexpectedly poignant ending. How will Veep come back for the promised new series if Selina is out of politics?